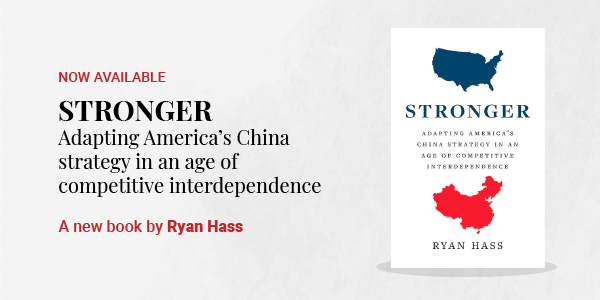 WITA China Roundtable: A New U.S. Strategy for an Age of Competitive Interdependence

On May 5, 2021, WITA discussed Stronger: Adapting America’s China strategy in an age of competitive interdependence with the author, Ryan Hass, and an expert panel.

John Pomfret, Contributor, The Washington Post, Author of The Beautiful Country and the Middle Kingdom

Amy Celico is a Principal of Albright Stonebridge Group (ASG), and leads the firm’s China team in Washington, DC. Drawing on more than 20 years of experience, Ms. Celico develops and implements tailored strategies for clients, helping them deepen relationships with key stakeholders, resolve complex problems, and build and expand their business.

Prior to joining ASG, Ms. Celico served as Senior Director for China Affairs at the Office of the U.S. Trade Representative, where she developed trade policy positions for bilateral discussions with China through the Strategic Economic Dialogue and the U.S.-China Joint Commission on Commerce and Trade.

Previously, Ms. Celico served as Deputy Director of the Office of the Chinese Economic Area at the U.S. Department of Commerce; she has also worked at the U.S. Department of State, including as a diplomat stationed in Beijing and Shanghai. Prior to her government service, Ms. Celico was the Director of Development for the Johns Hopkins University-Nanjing University Center for Chinese and American Studies.

Ms. Celico earned a B.A. with honors in Asian Studies from Mount Holyoke College and completed her M.A. at the Johns Hopkins School of Advanced International Studies. She speaks Mandarin Chinese and spent seven years living and working in China.

Ryan Hass is a Senior Advisor with McLarty Associates and Scowcroft Group, and provides strategic advice to clients on a global set of issues, with a particular focus on Asia and China. Hass also serves as a fellow in the Foreign Policy program at the Brookings Institution, where he holds a joint appointment to the John L. Thornton China Center and the Center for East Asia Policy Studies.

Hass previously served as the director for China, Taiwan, and Mongolia at the National Security Council staff. In that role, he advised President Obama and senior White House officials on all aspects of US policy toward China, Taiwan, and Mongolia, and coordinated the implementation of US policy toward this region among U.S. government departments and agencies. He also worked closely with the US business community to address challenges that US stakeholders encountered in greater China. Hass joined President Obama’s state visit delegations in Beijing and Washington respectively in 2014 and 2015, and the president’s delegation to Nanjing, China, for the G-20 in 2016, and to Lima, Peru, for the Asia-Pacific Economic Cooperation (APEC) Leaders Meetings in 2016.

Prior to joining NSC, Hass served as a Foreign Service Officer in US Embassy Beijing, where he earned the State Department Director General’s award for impact and originality in reporting, an award given annually to the officer whose reporting had the greatest impact on the formulation of US foreign policy. Hass also served in Embassy Seoul and Embassy Ulaanbaatar, and domestically in the State Department Offices of Taiwan Coordination and Korean Affairs.

Hass was born and raised in Washington state. He graduated from the University of Washington and attended the Johns Hopkins School of Advanced International Studies prior to joining the State Department. He is a term member of the Council on Foreign Relations.

John Pomfret, raised in New York City and educated at Stanford and Nanjing universities, is an award-winning journalist who worked with the Washington Post for several decades. He currently is a contributing writer to the Post’s Global Opinions section.

Pomfret was a foreign correspondent for 20 years and spent eight years covering big wars and small in Afghanistan, Bosnia, Congo, Sri Lanka and Iraq. Pomfret spent seven years covering China—one in the late 1980s during the Tiananmen Square protests and then from 1997 until the end of 2003 as the bureau chief for the Washington Post in Beijing. Pomfret ran the Post’s Outlook section and covered U.S. relations with Asia.

In 2003, he won he Osborne Elliot Award for the best coverage of Asia. In 2007, Pomfret was awarded the Shorenstein Award from Harvard and Stanford universities for his lifetime coverage of Asia. In 1996, he was a finalist for the Pulitzer Prize in International Reporting for his work in Congo.

Pomfret is the author of the best-selling “Chinese Lessons: Five Classmates and the Story of the New China” (1996). His latest book, “The Beautiful Country and the Middle Kingdom: America and China, 1776 to the Present” (2016) was awarded the 2017 Arthur Ross Award by the Council on Foreign Relations. His new book, “From Warsaw With Love: Polish Spies, the CIA and the Making of an Unlikely Alliance” will be published in October 2021. Pomfret has also partnered with a leading Chinese business executive to write his memoirs.

Pomfret speaks, reads and writes Mandarin, having spent two years at Nanjing University in the early 1980s as part of one of the first groups of American students to study in China. He graduated from Stanford University with a BA and MA in East Asian Studies.

Wendy Cutler is Vice President at the Asia Society Policy Institute (ASPI) and the managing director of the Washington, D.C. office. In these roles, she focuses on building ASPI’s presence in the nation’s capital and on leading initiatives that address challenges related to trade, investment and innovation, as well as women’s empowerment in Asia.

She joined ASPI following an illustrious career of nearly three decades as a diplomat and negotiator in the Office of the U.S. Trade Representative (USTR), where she also served as Acting Deputy U.S. Trade Representative. During her USTR career, she worked on a range of bilateral, regional and multilateral trade negotiations and initiatives, including the U.S.-Korea Free Trade Agreement, the Trans Pacific Partnership, U.S.-China negotiations and the WTO Financial Services negotiations. She has published a series of ASPI papers on the Asian trade landscape, and serves as a regular media commentator on trade and investment developments in Asia and the world.