WITA > ITCC Webinar: Trade Is Not a Four Letter Word: Fred Hochberg on Global Trade Policy in the Age of Tariffs and Sanctions

ITCC Webinar: Trade Is Not a Four Letter Word: Fred Hochberg on Global Trade Policy in the Age of Tariffs and Sanctions 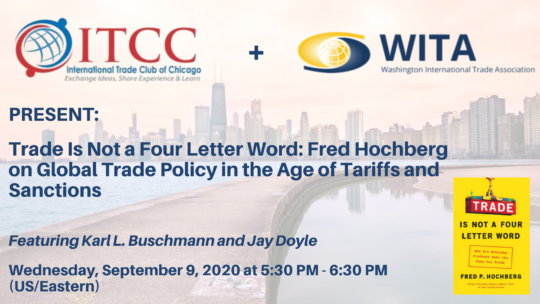 Trade—the exchange that powers the world—allows us to sell what we produce at home and purchase what we don’t. In the age of globalization, trade has joined together more people than ever before, providing access to major new markets and countless new products that have revolutionized our lives.

However, for millions of people, global trade has become a popular target for blame and the frustrations of modern life. Much of the public only connects trade with unfathomable, high-level deals causing the fundamental principles to often seem inaccessible and confusing.

In his new book Trade Is Not a Four Letter Word, and through the lens of six quintessential American goods, Fred P. Hochberg breaks down colorful and compelling real-world examples to dispel the widespread myths and confusions surrounding trade. By using six widely consumed American goods—the taco salad, the minivan, the banana, the iPhone, the college degree, and the HBO series Game of Thrones—Hochberg highlights the story of America’s most surprising trade relationships while sharing the essentials of trade that everyone should know.   Fred P. Hochberg served as the Chairman and President of the Export–Import Bank of the United States (EXIM) from 2009–2017, becoming the longest-serving Chairman in the institution’s history.