The trade deal US President Donald Trump signed with Japan last week is part of a patchwork strategy for helping farmers make up for lost exports to China as he wages a bruising tariff war with Beijing. Despite those efforts, the Chinese market is proving almost impossible to replace.

Farm exports in fiscal 2019 are down nearly 7 per cent from 2018, exacerbating one of the toughest periods for agriculture since the 1980s farm crisis.

Sales to China alone in fiscal 2019 are down US$7.7 billion. In contrast, the Japan agreement might boost farm exports by less than US$3 billion, based on independent analysis of similar deals.

Trump’s agriculture and trade officials say the trade war is providing an opportunity to wean farmers off their dependence on trade with China, and they are racing to cut more deals, especially in regions with large or fast-growing populations like Southeast Asia.

But farmers are losing patience as their crops continue to pile up in storage, potentially jeopardising Trump’s support among a group that was key to his election in 2016.

Even though they are getting federal bailout payments to help ease losses from the trade war, many are desperate for Trump to cut a deal with China.

Farmers “are not starting to do great again”, said Brian Thalmann, president of the Minnesota Corn Growers Association, at an industry gathering last month. “Things are going downhill, and downhill very quickly.”

US farmers spent decades cultivating customers in China, and the market dwarfs others with its sheer size and its potential for growth.

The UN projected in 2017 that China will account for 29 per cent of the growth in global meat consumption alone through 2026. That is more than North America, most of Europe, Australia, Chile, Japan, South Korea and others combined.

Ken Morrison, an agricultural commodities market veteran who worked in China for years, said the theory of replacing Chinese demand by stacking up other export markets is “at best smoke and mirrors”.

“If they truly believe they can offset China, it’s fantasy,” Morrison said.

With the Japan deal, Trump is merely making up for the business that farmers lost when he pulled out of the Trans-Pacific Partnership in 2017. It will help US exporters keep pace with competitors like Australia and Canada that have grown their footprint in Pacific Rim nations since the new 11-nation TPP took effect this year.

The White House said the deal will gradually reduce or eliminate Japanese duties on US$7.2 billion in US products, but it is unclear how much exports will increase because of the lower tariffs. Purdue University this year projected rejoining the TPP would boost US agricultural exports by US$2.9 billion.

Some of the groups hit hardest by the president’s hard-line trade tactics, like soybean growers, say they will not see meaningful gains in Japan.

Soybean exports through July were down US$5.5 billion from the previous year, a nearly 30 per cent drop. Now farmers are planting 9 million fewer acres of the crop this year, or 10 per cent less than 2018, according to USDA estimates.

Even pork producers, who count Japan as one of their most valuable markets, view the newly signed trade deal as helping them get back to even after Trump’s TPP exit. 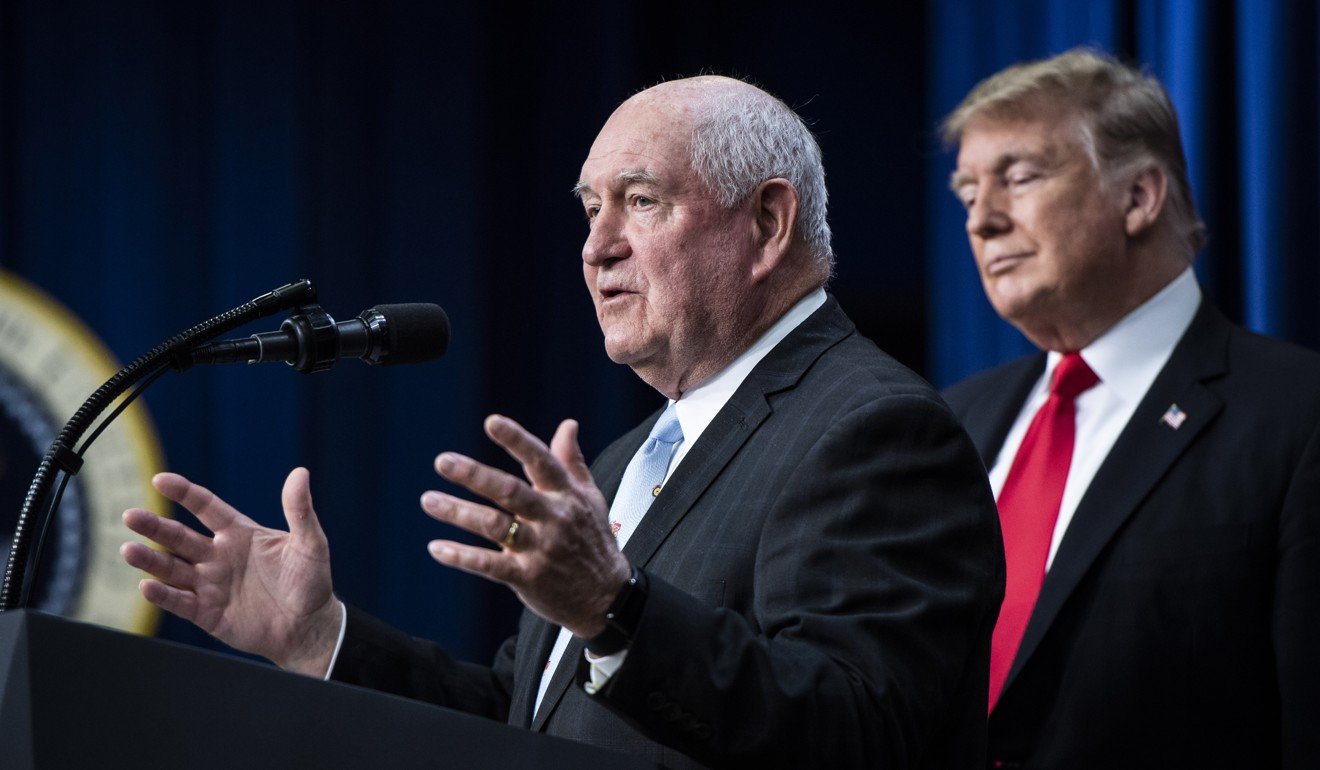 US Secretary of Agriculture Sonny Perdue (left) and President Donald Trump at a signing ceremony for a farm bill in Washington in December. Photo: Jabin Botsford/Washington Post

A trade agreement with the European Union is another top target for the Trump administration. But some trade watchers predict a potential pact with Europe, like Japan, would still not be enough to make up for heavy losses in China over the long run.

“They’re not real growth markets,” said Joe Glauber, former chief economist at the Agriculture Department. “You don’t see the sort of growth in per-capita protein consumption that you see in China.”

Trade officials are planning to resume high-level talks with Beijing officials next week in an attempt to reach a deal that would reopen China’s markets to US farmers.

But the administration is also eyeing other trade routes for the future. Agriculture Secretary Sonny Perdue has frequently cited the number of “hungry mouths” in countries like India, Thailand, Indonesia and Malaysia.

“I think we became too dependent on the Chinese market, with soybeans, particularly,” he said.

USDA trade officials have led a series of overseas trips in an effort to open new markets, including a visit to Canada this month and three more missions planned for 2019.

The trade trips have frequently yielded one-off agreements and private sales between US companies and foreign buyers – but not exactly the game-changing deals that farmers and trade groups say are needed.

Ted McKinney, undersecretary for trade and foreign agriculture, has touted the success of the trade delegations in laying the foundation for a more diversified export network. At a House Agriculture Committee hearing in June, he mentioned a 2018 visit to Guatemala, El Salvador and Honduras that set a record for agricultural sales resulting from a USDA-sponsored mission.

The 12-month sales projection for Guatemala following the trip was US$49 million, the highest total since USDA launched the trade mission programme in 2010, according to the Foreign Agricultural Service. 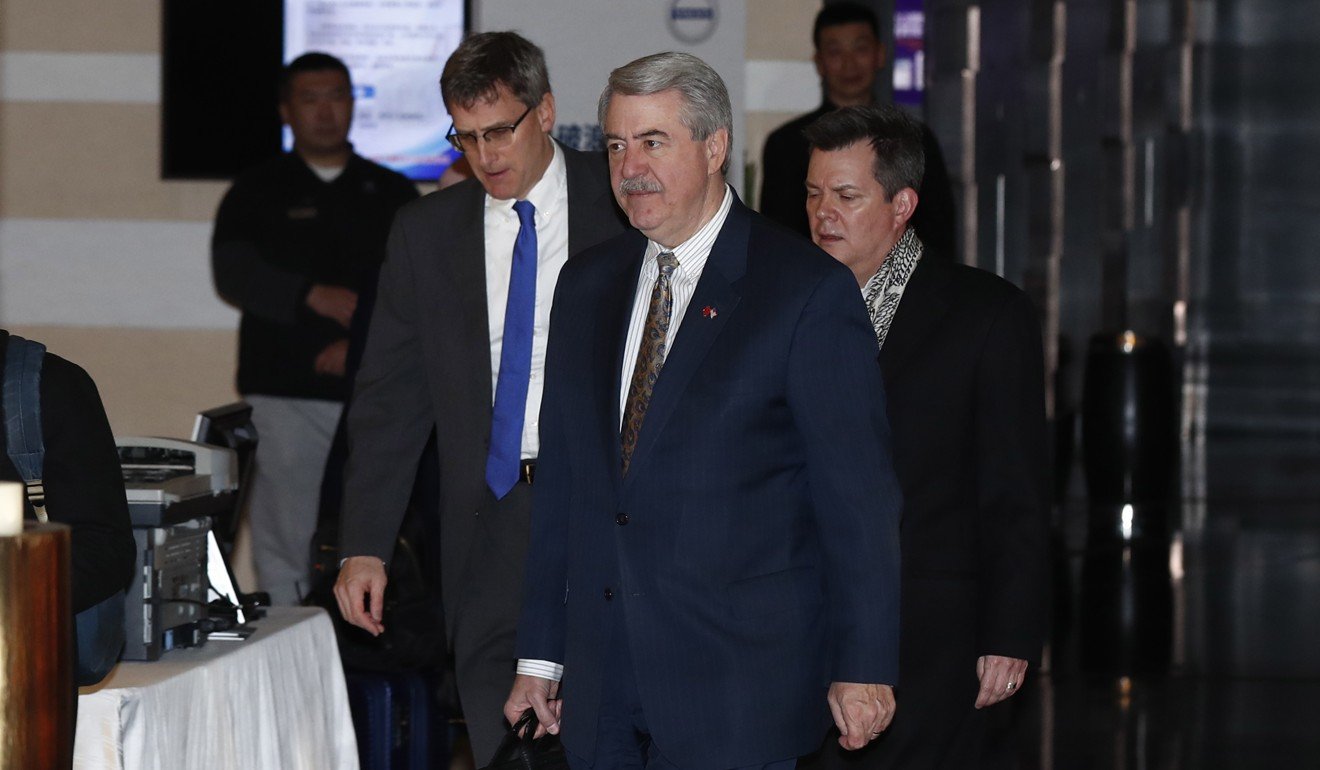 US Undersecretary for Trade and Foreign Agricultural Affairs Ted McKinney (front) walks with other delegates as they leave the Westin Hotel in Beijing at the start of trade talks between China and the US in January. Photo: EPA-EFE

“Though that’s not a China-, Canada-, Mexico-, Japan-[sized] market … it does say that there’s business out there if we go knock on the door,” McKinney said. “Multiply this times many, many areas, and I think you get something.”

Stacked against trade with China, however, the pacts with individual countries are a mere pittance. After a 2017 deal, pork exports to Argentina steadily climbed from just US$6,000 in fiscal 2016 to US$1.6 million in fiscal 2019 through July. Yet, that’s a fraction of overall US pork exports, which totalled US$6.6 billion last year, according to USDA data.

The National Pork Producers Council has estimated that the trade dispute with China is costing the industry more than US$1 billion annually.

“China has more potential than any single market for expanded pork exports,” especially as African swine fever has decimated the country’s pig herds and created “explosive demand for imported pork”, said Nick Giordano, NPPC’s vice-president for global government affairs. “How can you replace that? You can’t.”

To raise or not to raise? That is the question for China’s pig farmers

Still, Giordano praised the Trump administration’s efforts to open up smaller markets around the world. He pointed to Thailand and Ecuador as examples of “small-ball markets” where his members see opportunities.

“They’re not just blowing smoke here. They are working hard to open new markets for us. They’re being extremely aggressive,” he said.

While overall agricultural exports are down, exports to major trading partners including the EU, Japan and Mexico have increased since Trump’s tariff battle began in 2018. That has helped blunt some of the financial pain from the decline in sales to China. 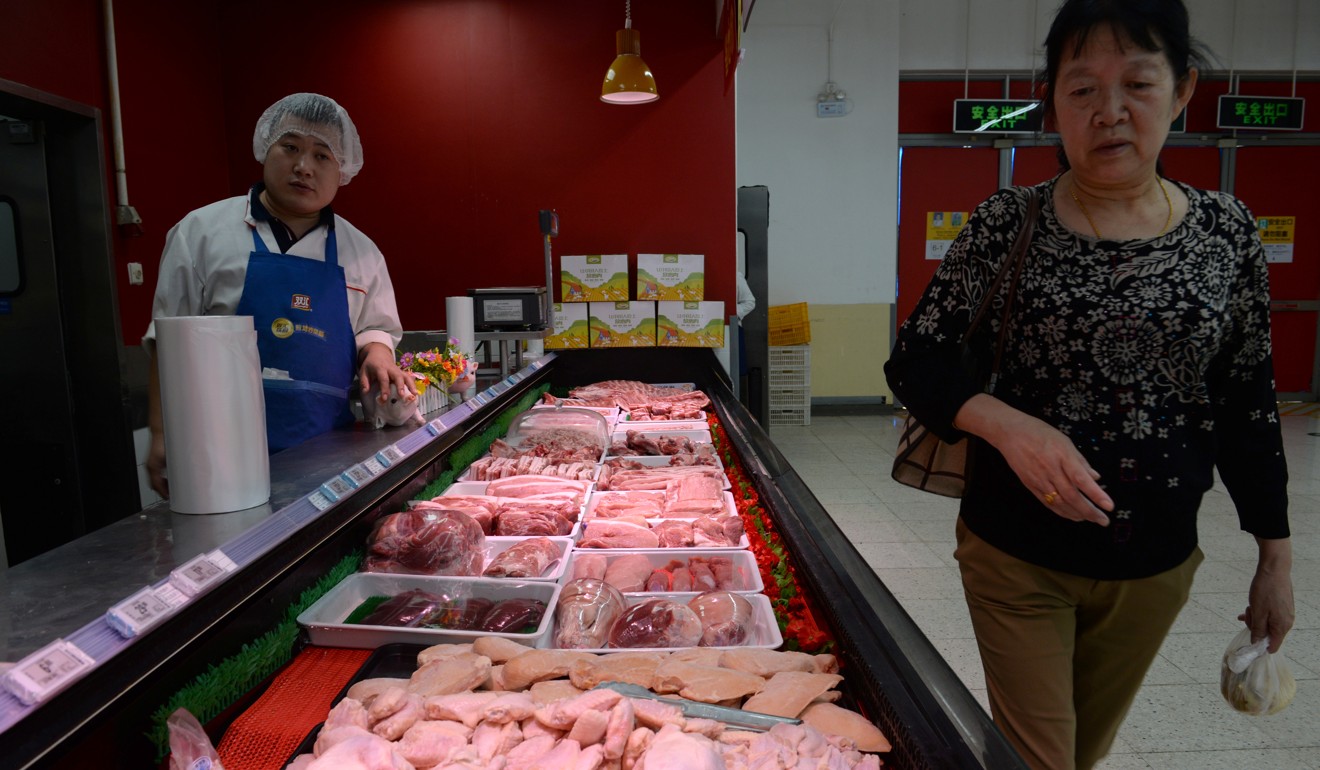 A woman looks at pork at a Walmart in Beijing on September 23. Photo: Reuters

But the increase is partly because commodity prices have fallen, allowing other countries to stock up on US farm goods at a discount. There is reason to think the buying spree will not last much longer, which could lay bare a much uglier trade picture if the spat with Beijing continues to worsen.

“I think what we should keep an eye on is if those sales start to slow down, because there’s only so much product you can put in storage,” said Veronica Nigh, an economist with the American Farm Bureau Federation.

Even with the current bump in farm sales to other large nations, Nigh said, “It seems unlikely we will be able to make up all of the losses that we’ve experienced in the Chinese market.”