How the War in Ukraine is Reshaping World Trade and Investment

The war in Ukraine is causing worldwide disruptions to trade and investment, affecting auto makers in Europe, hoteliers in Georgia and the Maldives, as well as impacting consumers of food and fuel globally. Although the world’s poor—who spend a large part of their incomes on life’s necessities—are the most vulnerable, no country, region, or industry is left untouched by these disruptions.

A new World Bank report — The Impact of the War in Ukraine on Global Trade and Investment — shows that world trade will drop by one percent, lowering global GDP by just under one percent. Manufacturing exporters such as Vietnam, Thailand, and Mexico see a sharp decline, especially in energy intensive sectors. Net exporters of crops, including Turkey, Brazil, and India, and of fossil fuels, such as Nigeria and countries in the Middle East, see a surge in their exports, attenuating the negative effects of the war. The economic shock waves are moving through five channels: commodity markets, logistics networks, supply chains, foreign direct investment (FDI), and sectors such as tourism.

The war comes at a difficult moment for the world economy. The recovery from the pandemic-induced recession has been slowing as new coronavirus variants emerged sand governments reined in spending. Rising inflation has prompted the Federal Reserve and other major central banks to raise interest rates. Disruptions in world trade and investment will curb growth in developing countries and add to price pressures.

The potential for a food crisis is the most alarming concern. Prices of wheat and other grains have already soared. In 2019, Russia and Ukraine combined, accounted for 25 percent of the world’s wheat exports and 14 percent of corn shipments . Many countries around the world are heavily dependent on these flows. The Republic of Congo, for example, relies on imports from the Black Sea region for 67 percent of the wheat it consumes.

After food prices, energy prices are the most directly affected. Russia is one of the world’s biggest energy suppliers, providing 14 percent of its crude oil and 9 percent of its natural gas globally.  Our simulation generates a 7 percent increase in the price of crude oil, which in turn raises the costs of transportation and production in manufacturing, leading to a drop in exports (Figure 1). Higher prices for natural gas, a key ingredient for ammonia fertilizer, will push up costs for farmers and reduce crop yields, further exacerbating food shortages.

Figure 1: Change in exports relative to reference year as a share of real GDP 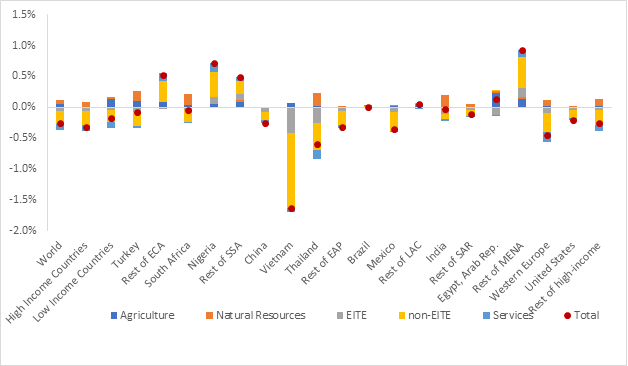 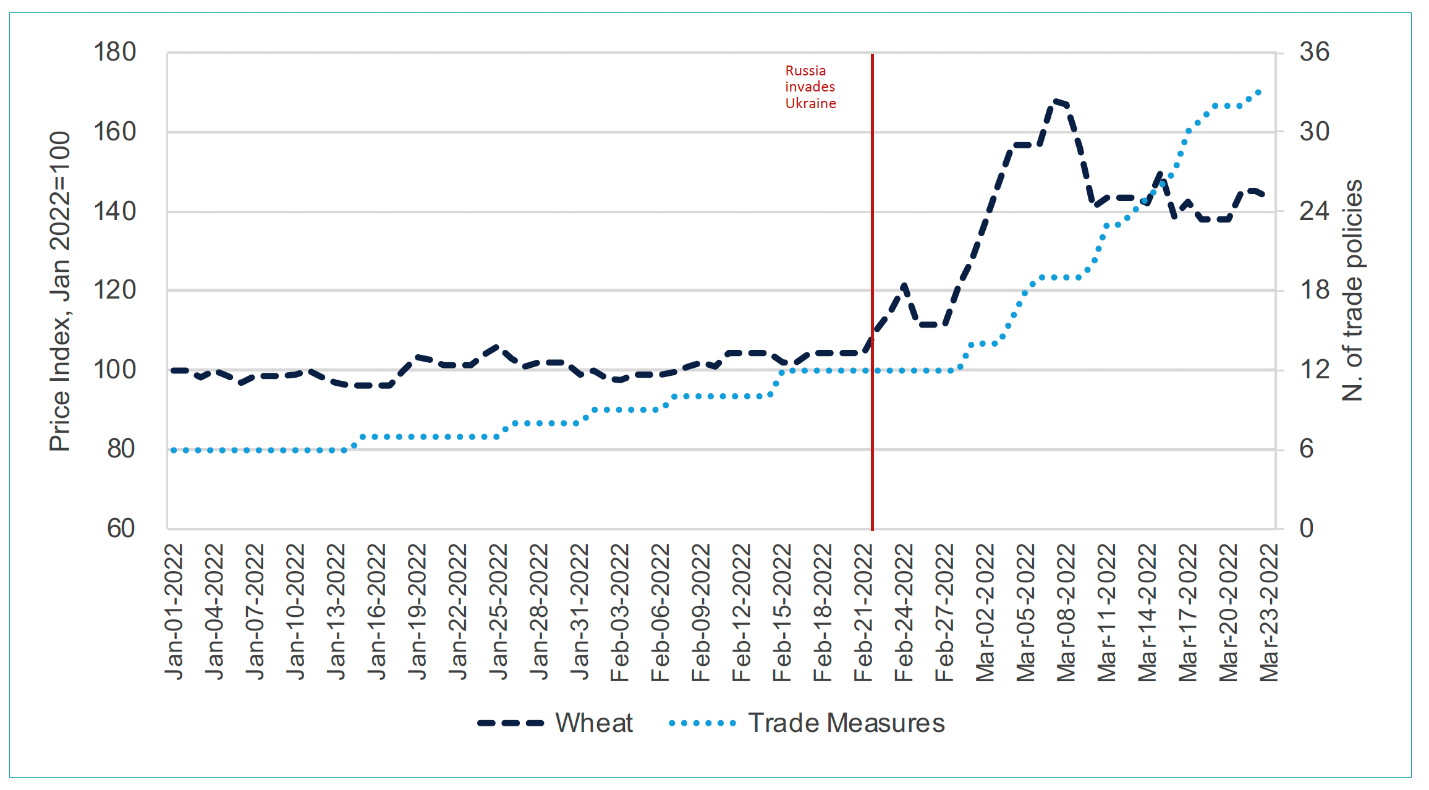 Input shortages and other disruptions

The war and resulting sanctions have severed key transport links between Russia and Ukraine and the rest of the world, disrupting trade more broadly . Russia’s connections to European ports have been cut, and commodity exports to other destinations have been constrained. Ukraine’s Black Sea ports have been blockaded or occupied, leaving the country few routes for its commodity exports. Air freight between Europe and Asia must now be rerouted to avoid Russian airspace. Rail transit through Russia is slowing due to checks for sanctions compliance, and further rounds of sanctions could risk halting rail transit entirely.

Disruptions to global and regional supply chains have caused input shortages and price hikes. Ukraine is a key supplier of inputs, including ignition cables for autos, neon gas for semiconductors, and iron ore for steel mills. Companies making transport equipment, machinery, electronics, and food products are especially reliant on Russian metals, chemicals, fertilizers, and other commodities.

Russia and Ukraine aren’t major players in the world’s FDI networks, but the war will nevertheless have an impact on some countries and industries. Armenia, Moldova, and the Kyrgyz Republic depend heavily on Russian investment. And European countries including Finland, Germany, and Norway have major stakes in Russia’s energy sector.

Tourism will also suffer, especially in developing countries. Georgia and Montenegro are highly dependent on Russian and Ukrainian visitors. A decline in global tourism will at least temporarily stall the industry’s post-pandemic recovery, as scheduled flights are disrupted and consumers reassess their travel plans.

What are the war’s likely long-term effects?

Some fear that the war will lead to a corrosion of globalization – the engine of growth and development for the past 30 years. Our analysis shows that firms will re-assess geopolitical risks and may move production away from countries they see as riskier, possibly reshaping global value chains to some extent. But given the capital in place, the cost of searching for alternatives, and wage differentials across countries, this process is likely to be gradual rather than sudden. And it will not result in a reversal of globalization unless it is supported by pronounced government intervention.

The big unknown and risk comes from policies aiming at fragmenting the trade system rather than defusing tensions and strengthening global value chains against future disruptions.

To read the full report from the World Bank, please click here.