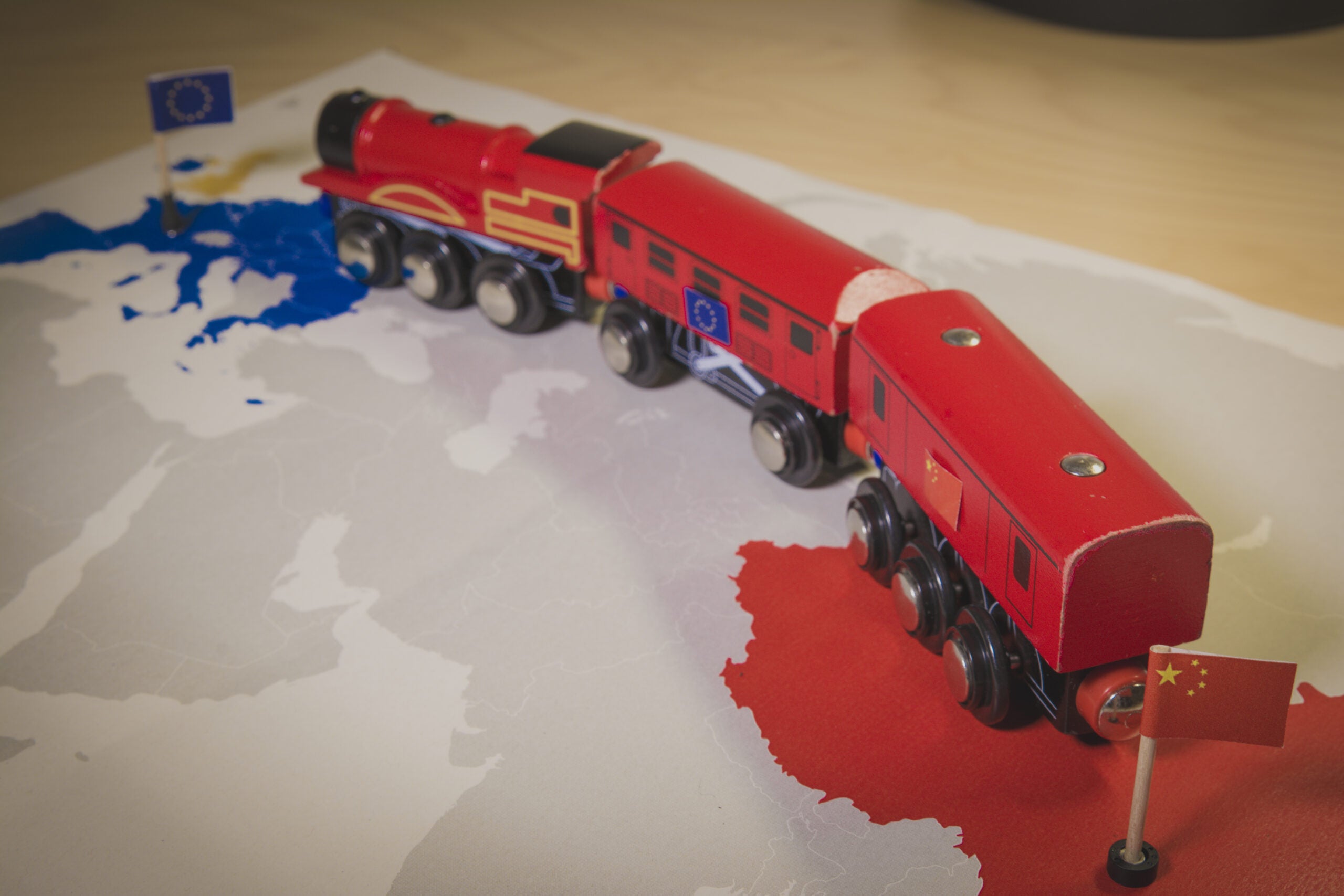 A new kind of Belt and Road Initiative after the pandemic

Since President Xi announced China’s grand strategy, the Belt and Road Initiative, in Kazakhstan in 2013, it has grown so much in geographic and conceptual scope that it has become difficult to measure. Agreements setting out some form of formal affiliation with the initiative have been signed with 146 countries. Meanwhile, the projects covered by this grand strategy have increased in number but also in terms of sectoral and geographic complexity, from the Arctic to the deep oceans, from Latin America to outer space.

The COVID-19 pandemic, however, has been a major complication for the BRI. Since January 2020, China has closed its borders to the world, cutting off most in-person exchanges and crippling businesses’ ability to evaluate, negotiate and conclude new deals (Figures 1 and 2). 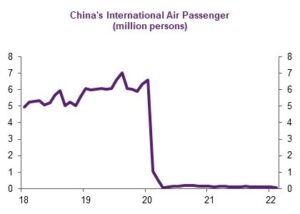 At the same time, negative sentiment about China has grown in many countries, particularly developed economies in Europe and Southeast Asia (see here, for example). Sentiment analysis based on big data from news feeds also showed a clear deterioration globally in 2020 of positive perceptions of China’s and the BRI, though there has been some recovery since (Figure 3). 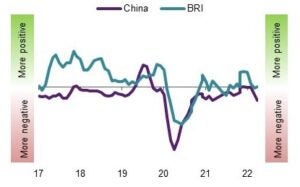 The pandemic’s negative economic effects on many developing countries have also reduced interest in the BRI. Many prominent BRI partner countries, such as Sri Lanka, now face debt distress arising from unrelated pressures including a strong dollar, high oil and food prices, and a collapse in the tax base during the pandemic. This has made Chinese banks and firms relatively less interested in projects in many of these countries, while undermining the ability of host countries to contemplate ambitious capital expenditures in the BRI’s traditional sectors, such as transport and logistics.

Many BRI projects underway before the pandemic appear to have been abandoned. The Overseas Development Institute (ODI) detailed 15 projects worth over $2.4 billion that faced financial difficulties in 2020, including the Kunzvi Dam electricity project in Zimbabwe, contracted to Sinohydro. Fifteen projects with problems is surely an underestimate. Given the opacity of China’s reporting on BRI projects, it will likely be at least another year until the extent of this downsizing can be quantified.

Predictably, Chinese overseas FDI during the pandemic declined everywhere (see data from theAmerican Enterprise Institute and Mergermarket, a provider of information on merger and acquisiton deals globally). China’s investment overseas sometimes includes control (foreign direct investment or FDI) through acquisitions of companies or greenfield investment, and sometimes is poor lending, especially project finance. As Figure 4 shows, all of these measures of China’s outward FDI globally plummeted 72% in 2020 from the average of the previous five years. In BRI countries, Chinese FDI was down 62%. 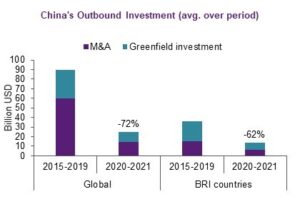 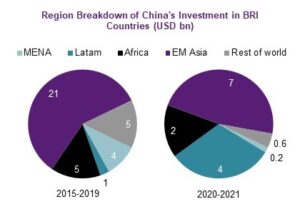 Chinese development finance (lending rather than equity purchases) into BRI geographies has also plummeted (Figure 6). This is particularly problematic for countries that are highly dependent on Chinese lending to finance their infrastructure. Some of these countries have growing current account deficits which they will need to finance. 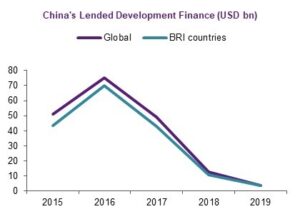 The BRI faces two main macroeconomic constraints this year. The first is that China is far from exiting the COVID-19 pandemic. Its dynamic zero-COVID policy is impeding cross-border business exchange. China’s economy has rapidly decelerated in the first half of 2022, because of the central government’s draconian restrictions and the attempts of local officials to over-comply with instructions. The slowdown is putting additional pressure on banks to lend domestically rather than overseas. Such lending is essential in the financing of major infrastructure projects overseas. Furthermore, the tighter grip of overseas regulators (especially the US) has been limiting Chinese corporations’ ability to raise funds in hard currency, whether through listings in foreign stock exchanges or offshore bond issuance.

Figure 7: Chinese trade, value (% of GDP) and growth by partner

What is the longer-term prognosis? Will the current abrupt slowdown reverse, or will the BRI fade into irrelevance? This depends partly on Chinese domestic politics. The longer China remains locked within its borders, and the deeper the Chinese economy slides in the second half of 2022, the harder it will be to maintain the same level of ambition. As long as borders are closed, China’s overseas investment is bound to remain muted, limiting the number of new projects Chinese firms will want to take on. Cross-border mobility restrictions will also hamper China’s ability to send workers overseas for construction and logistics purposes.

Nevertheless, there is a wealth of reasons to believe that the BRI remains central to the global ambitions of China’s leadership. A more plausible scenario is that the BRI is evolving to serve better the interests of Chinese leaders under the current, rapidly changing, circumstances. China’s leadership remains deeply committed to the BRI as emphasised in February 2022 by Politburo Standing Committee member Han Zheng, chairman of the Leading Small Group responsible for the Belt and Road. However, he also advised Chinese banks and companies to focus on projects that “improve people’s sense of gain in participating countries,” and for the leadership to seek “greater alignment” of the BRI and China’s domestic macroeconomic strategies such as dual circulation, while strengthening “risk monitoring and prediction”. These comments were implicit criticisms of how the BRI has been rolled out to date, for two main reasons. The first is the international pushback, both from recipient countries after having increased their debt to finance unviable projects, and from developed economies, especially the US, the EU and Japan, who see their global influence curtailed by China’s expansion overseas. The second reason is domestic, stemming from the rather low return on investment for China as a good part of BRI related projects have failed or been delayed, or have ended up with cost overruns.

Notwithstanding these challenges, the Chinese government does not seem ready to abandon the BRI, but rather to transform into a sort of BRI 2.0. China seems to be losing interest in funding infrastructure and would prefer to increase its soft, and possibly even hard, power through other means of influence. The BRI is also linked increasingly to China’s geopolitical objective of proposing an alternative global order to the liberal order led by the United States.

One example of how the BRI may be an instrument for China to expand its hard power is the signature of a security pact with the Solomon Islands, which could have as objective reshaping the strategic balance in the South Pacific, where security is currently dominated by Australia and the US. While the pact was not formally connected to the BRI, the Solomons joined the BRI in 2019, and China and the Solomons continually referred to the BRI as they negotiated the security deal, suggesting that the two are linked. When Chinese Foreign Minister Wang Yi went on a follow-up tour in May, hoping to secure a broader regional security deal, he visited Kiribati where he signed 10 outcome documents, including an expanded BRI cooperation plan. Along the same lines, there are some indications that China wants to establish a naval facility in Equatorial Guinea, as a door to the Atlantic Ocean. Equatorial Guinea is also a recent BRI member. Finally, Chinese media are increasingly explicit about treating the BRI as a soft power tool, instructing party cadres to ‘tell the BRI’s story well’ as part of a broader effort to ‘tell China’s story well’.

These incremental steps allow the BRI to touch on issues far more closely related to security than was the case before the pandemic. A strong signal of the latter was given by President Xi at the Boao Forum for Asia in April 2022, where he proposed a new Global Security Initiative (GSI). Elaborating on Xi’s comments, Foreign Minister Wang Yi wrote in the People’s Daily that the initiative “contributes Chinese wisdom to make up for the human peace deficit and provides a Chinese solution to cope with the international security challenge”. This is very similar language to the ‘Chinese wisdom’ that propagandists claim is motivating the BRI. In talks with Jordanian counterparts late last month, the Chairman of the Standing Committee of the National People’s Congress Li Zhanshu made a single integrated pitch for the BRI and GSI. These are all hints that the BRI is evolving from an infra-centric strategy to a security one.

In conclusion, since the COVID-19 pandemic started, the BRI has faced short-term macroeconomic headwinds because of China’s much worsened economic situation, and because of recipient countries’ negative sentiments about China as some projects fail to deliver their expected benefits and debt continues to pile up. This, however, should not be read as the end of the BRI. The strategy is just too important for the Chinese leadership. If anything, it is more important than ever as China needs to build alliances in its strategic competition with the US. The BRI is transforming from an infrastructure-led project to a more political one where soft, and even hard, power are central. In other words, Xi Jinping’s grand vision of the BRI is evolving into a more versatile and hard-edged instrument of statecraft. This is much more in line with China’s broader domestic goals, as financial resources are increasingly needed within its own borders. It is potentially also more effective at furthering China’s interests abroad.

Alicia García Herrero is a Senior Fellow at European think-tank BRUEGEL. She is also the Chief Economist for Asia Pacific at Natixis, and a non-resident Senior Follow at the East Asian Institute (EAI) of the National University Singapore (NUS). Alicia is also Adjunct Professor at the Hong Kong University of Science and Technology. Finally, she is a Member of the Council of Advisors on Economic Affairs to the Spanish Government and an advisor to the Hong Kong Monetary Authority’s research arm (HKIMR) among other advisory and academic positions.

Eyck Freymann is a doctoral candidate in Area Studies (China) at Balliol College, University of Oxford. His research examines why democratic countries engage with China’s One Belt One Road initiative, and how Chinese mega-projects influence their domestic politics. Eyck holds an MPhil from the University of Cambridge, where he was a Henry Scholar; an AM in Asian Studies from Harvard University where he won the Joseph Fletcher prize for top thesis in Asian studies; and an AB in East Asian History with highest honors, also from Harvard.

To read the full commentary by the Bruegel, please click here.