Blogs > Crisis? What crisis? COVID-19 and the unexpected recovery of regional trade in East Africa

Crisis? What crisis? COVID-19 and the unexpected recovery of regional trade in East Africa

At the beginning of the COVID-19 pandemic, such was the scale of the economic disruption caused by lockdown measures that there was much talk of the collapse of global trade. In the midst of the lockdowns, in April, the World Trade Organization estimated that the decline would amount from anywhere between 13 and 32 percent. In a similar vein, UNCTAD was forecasting a 20 percent decline in global trade for 2020.

However, recently released trade statistics across the world reveal that those forecasts may have been overly pessimistic and underestimated the relative resilience of the global trading system. In fact, in June, after several months of sharp declines, trade volumes recorded their biggest monthly rise on record, with a 7.6 percent increase. East Africa may be shadowing these global trends.

Kenya, the largest regional trader, is a good barometer of broader East African trends. The country was initially hit quite hard in terms of the decline in trade volumes, with a 19 percent drop in total trade volumes in April. As warned in our earlier Brookings policy brief, re-exports to the rest of the region were hit extremely hard, with a 83 percent decline in April. Since June, though, total trade volumes have begun to recover rapidly, with a 9 percent increase in June and a 12 percent increase in July (Table 1). Moreover, the story is a similar if the analysis is undertaken using year-on-year percent changes.

Kenyan exports have proved to be particularly resilient during this crisis. If we take the data for “domestic exports” alone (i.e., subtracting the re-export of goods to other countries), it is clear that the export performance has been extremely volatile, with a record monthly peak in export revenues in March, followed by a sharp drop in April/May. However, by July, domestic exports were 12.7 percent higher than in July of the previous year (Figure 1, Panel A). More specifically, although Kenya’s large cut-flower industry has not yet fully recovered, seasonal exports of tea, fruit, and vegetables have held up extremely well, in part due to government measures to protect these sectors from the negative impacts of lockdowns. Among the measures undertaken were the ring-fencing of the tea sector from mobility restrictions to minimize the disruption to exports; the re-equipping of some passenger planes to be able to carry cargo; and the creation of mobile laboratories for cross-border testing to facilitate smooth trade flows with Tanzania.

The other salient characteristic in Kenya’s trade performance throughout the COVID-19 crisis is that exports to the rest of the East African Community (EAC) recovered very rapidly indeed (Figure 1, panels B, C, and D). In our earlier Brookings policy brief analyzing data up through May, we flagged with some alarm the apparent collapse of intra-regional trade, as reflected in the sharp decline in Kenya re-exports to the rest of the region. By July, however, exports to Uganda and Rwanda had exceeded their pre-COVID-19 peaks, and re-exports towards Tanzania also accelerated sharply. Notably, the recovery picture is broadly confirmed by data recently released by the Bank of Uganda. Both export and import performance have recovered, and Ugandan coffee exports almost reached a historic high in July, despite relatively low coffee prices in international markets.

Figure 1. Patterns of trade—Kenya vs. other EAC countries 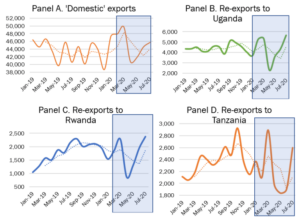 Initially, measures to prevent the spread of COVID-19 across borders, such as mandatory COVID-19 tests on lorry drivers, caused large-scale disruption to East African trade. But the subsequent rebound in intra-regional trade is a testimony to the effectiveness of actions taken by national governments and the EAC Secretariat to ensure the smooth functioning of transport corridors, as well as initiatives like TradeMark East Africa’s $20 million Safe Trade Emergency Facility (STEF) and GIZ’s support of mobile laboratories, test kits, and personal protective equipment to the East African Community.

In summary, despite the depth of the economic crisis precipitated by the COVID-19 pandemic, since May 2020 intra-regional trade in East Africa has shown significant resilience with a notable positive correlation with measures put in place to protect transport corridors from severe disruptions.

While the V-shaped recovery in trade is encouraging, East African economies are not out of the woods yet. Three policy conclusions stand out:

Anthony Mveyange is director of research and learning at TradeMark East Africa.