Blogs > Digital Africa: Leveling Up through Governance and Trade

Digital Africa: Leveling Up through Governance and Trade

Sub-Saharan Africa is sprinting toward digitization and has the potential to reach new heights as long as it addresses shortfalls in physical and human capital, as well as weaknesses and gaps in digital governance and regional trade agreements. While all four elements are critical, there has been less focus on digital governance and trade. This is a serious oversight.

Sub-Saharan Africa is unlikely to “level up” its digital game unless governments develop and update their national digitization strategies, ensure regional interoperability of these strategies, and work with foreign partners to add digital provisions to their trade agreements. As global digitization and trade become increasingly connected and interoperable, the lack of national digital strategies and dearth of digital provisions in trade frameworks threaten to slow sub-Saharan Africa’s digital transformation. African governments have fallen short on three key issues—intellectual property (IP) protection, data protection, and cybersecurity—which will impede regional competitiveness and have critical implications for security and trade in the region.

Sub-Saharan Africa is undergoing a digital transformation. From students learning to code and drones delivering medical supplies to the increased usage of mobile payment platforms, daily life is being redefined by digital technologies. According to the International Monetary Fund, internet penetration in sub-Saharan Africa has grown tenfold since the early 2000s, compared with a mere threefold increase in the rest of the world. The number of tech hubs on the continent has grown by 50 percent over the past several years, now numbering more than 600. And the region was home to nearly half of the world’s mobile money accounts in 2018 and will see the fastest growth in mobile money technology through 2025, according to the Brookings Institution. Three of the most digitally advanced countries in the region—Kenya, Nigeria, and South Africa—boast impressive internet penetration and are expected to be the top three markets for smartphone connections in 2025, according to the GSM Association (GSMA). 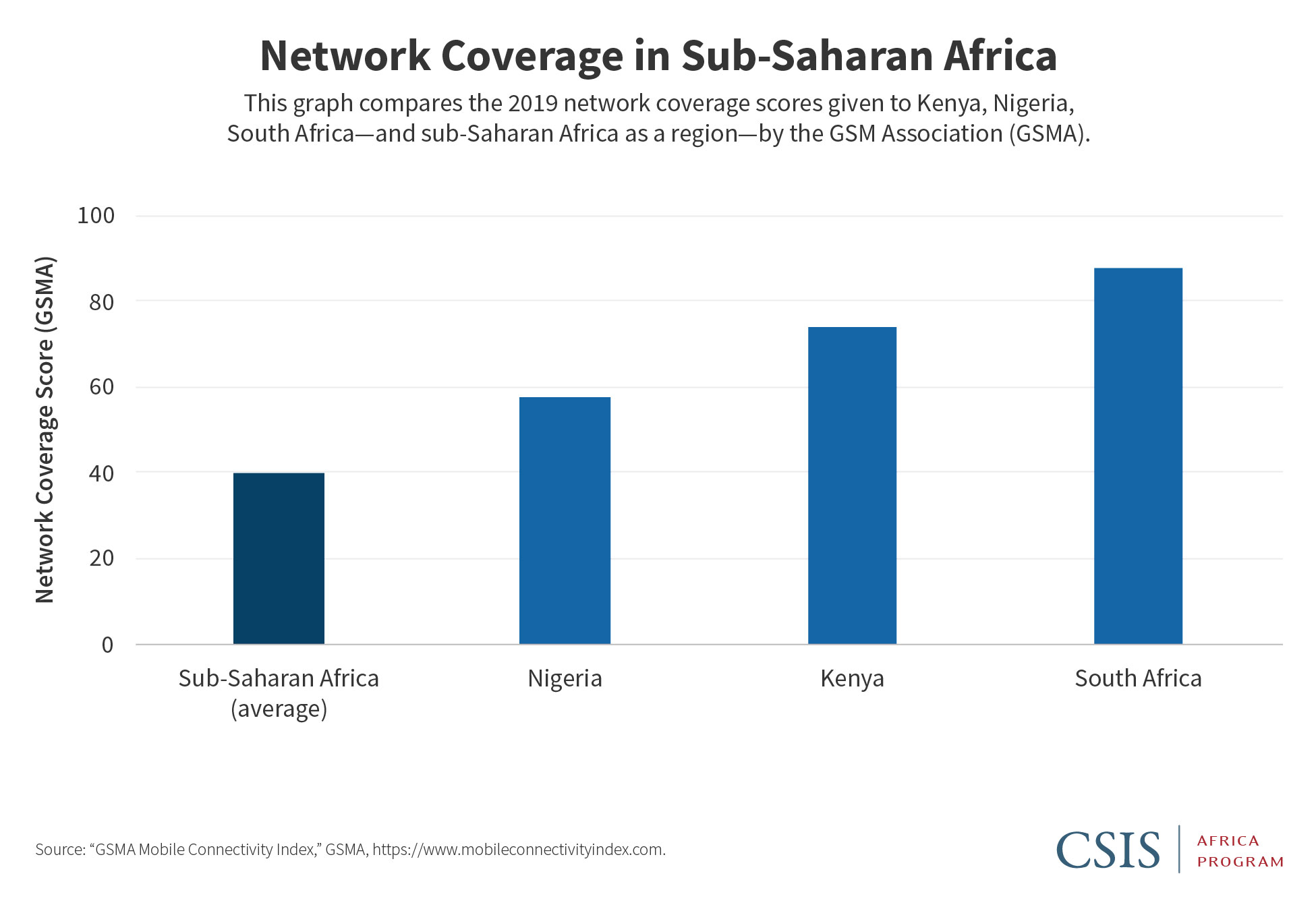 . . . But Still Not Ready for Prime-Time

This boom in digitization is unlikely to fulfill its potential until major blind spots are confronted head-on. These limitations stem from countries’ lack of or outdated national digital strategies and frameworks as well as lean or absent digital clauses in the multiple trade agreements to which African countries are signatories. These shortcomings could seriously hinder sustainable, secure digital growth and trade, and serve as a significant stumbling block to private sector competitiveness. If regional governments want their digital ecosystems to reach cruising altitude, they must develop robust digital governance frameworks and strengthen digital provisions regulating trade and investment with external partners.

A national digital strategy is a policy framework that strengthens governance on a host of digital issues such as IP protection, data security, ICT infrastructure, and human capacity development. Not only do national digital strategies generate digital norms for e-government services and private companies operating in the country, but they also help create open and predictable regulatory environments that attract trade and investment in national digital economies. Digital strategies go hand-in-hand with digital legislation—including on key issues like data protection and cybercrime—without which it is impossible for governments to facilitate secure, sustainable digital growth. According to the Organization for Economic Cooperation Development (OECD), as of 2021, only 28 African countries have comprehensive personal data protection legislation in place, while just 11 countries have adopted substantive laws on cybercrime. The lack of digital strategies and relevant legislation results in severe security gaps that leave countries vulnerable to the misuse and abuse of digital platforms and data.

African governments are signatories to a variety of multilateral trade agreements that outline norms and regulations around issues such as technical barriers to trade (TBTs), tariffs, and other trade restrictions. As digital technologies and platforms play a greater role in everyday life—from purchasing groceries and filling a gas tank to accessing health clinics—it is critical for these agreements to ensure protection of individual, private, and government data and property rights. Many of these trade agreements, however, skimp on details when it comes to digital issues like IP protection, digital privacy, and cybersecurity. CSIS reviewed six key trade agreements on the continent—the African Continental Free Trade Area (AfCFTA) Agreement, UK-Ghana Interim Trade Partnership Agreement, UK-Kenya Economic Partnership Agreement, European Union-East African Community (EU-EAC) Economic Partnership Agreement, the Cotonou Agreement, and the U.S.-Kenya Free Trade Agreement (FTA) Negotiation Principles—and found that only half include vague or general provisions around IP protection, while none include clauses on data protection or cybersecurity. 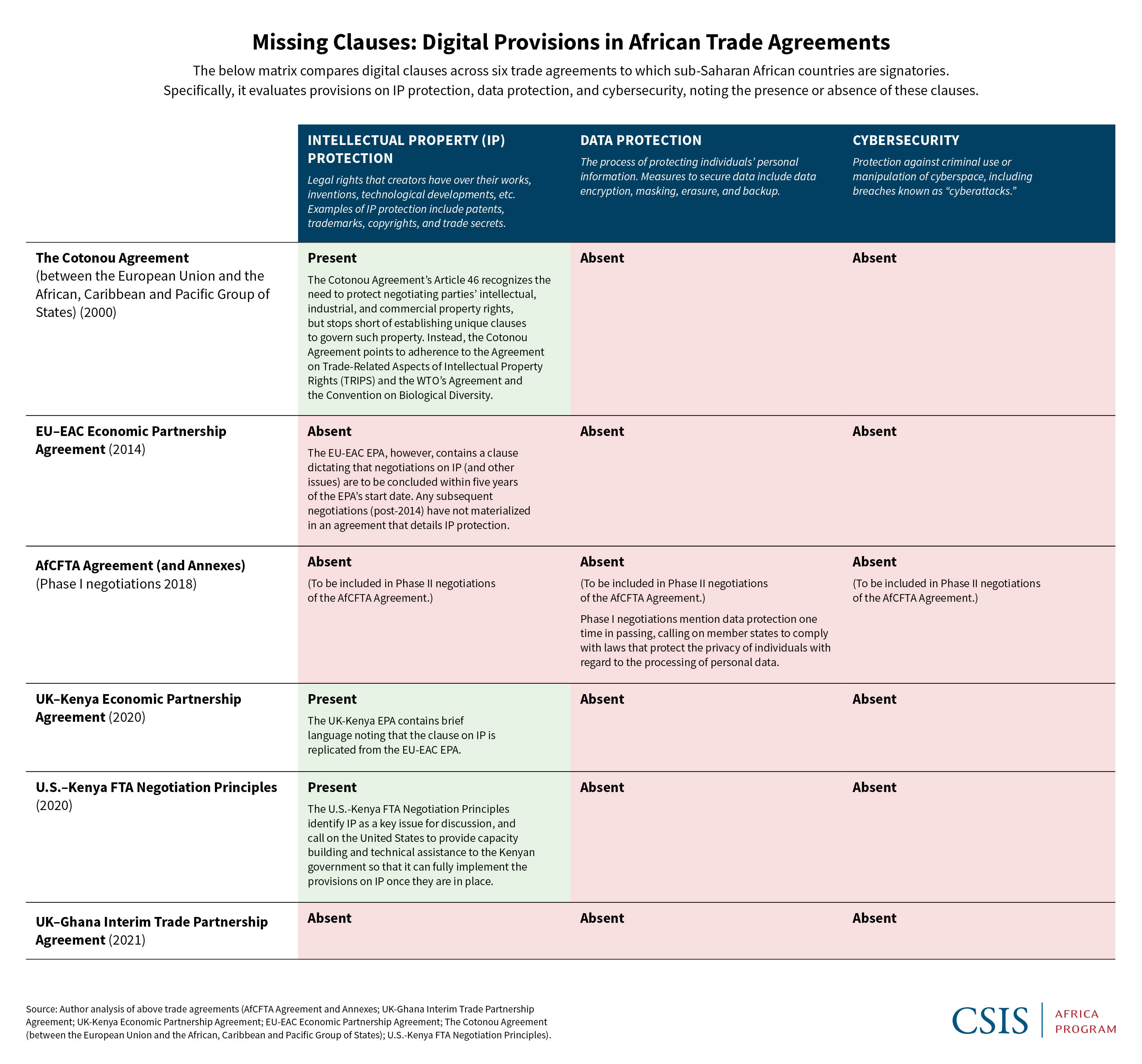 The Consequences of Inaction

Unless regional governments step up—developing and updating their national digital strategies and incorporating digital-specific clauses into their trade agreements—they will miss an opportunity to fully benefit from the unfolding digital transformation. Moreover, countries are likely to become more vulnerable to cyberattacks and may face a decrease in trade and investment from external partners.

Taking It to the Next Level

Update or Develop National ICT Strategies. As digital tools, services, and infrastructure become increasingly ubiquitous, it is critical for regional governments to shape sustainable digitization through a national plan, set of policies, or blueprint. And while numerous countries may have digital blueprints in place, it is the quality of and commitment to these strategies that counts. Regional governments should look to Kenya as a model, which has some of the most advanced digital legal frameworks on the continent, including its ICT Masterplan (2014) and Digital Economy Blueprint (2019). The Kenyan government is a regular convener of digital symposiums and, according to the International Trade Administration, has “invested heavily” in its ICT sector. In addition to national strategies, countries should pass laws related to IP protection, data privacy, and cybersecurity. Regional governments should take notes from Uganda which passed the Data Protection and Privacy Act in 2019, becoming the first African country to recognize data privacy as a human right. In addition, regional governments could prioritize training of legislators and judges who are often responsible for applying regional and international standards and regulations.

Engage the African Union. The African Union is a powerful convener on a host of issues, including digitization, with the capacity to strengthen coordination, align policies and sector regulation, and scale investment and dedication of resources for sustainable digitization. Building off its Digital Transformation Strategy for Africa (2020-2030)—which seeks to harmonize regulatory environments and guarantee investment and financing in the digital economy—the African Union should expand engagement with member states to not just update and develop national ICT strategies but to ensure alignment between those strategies. Regional interoperability is key to scaling digital applications across the continent. If something works in Kenya but cannot be used in Uganda and Tanzania, growth will be stunted. In addition, recognizing that the development of national policies take an enormous amount of time, money, effort, and political will and commitment, the African Union should ramp up regional conventions on digital issues. Examples of past conventions include the African Union’s Malabo Conventions (officially the Convention on Cyber Security and Personal Data Protection), which continues to be ratified by member states.

Build Out Digital Clauses in Phase II AfCFTA Protocols and U.S.-Kenya FTA Negotiations. Hopes are high for the ongoing AfCFTA Phase II negotiations, which include IP protection, data protection, and cybersecurity. These provisions will have enormous consequences for security and regulatory harmonization with the possibility to facilitate increased trade and investment. If the AfCFTA signs off on effective digital clauses, it will make the African continent an attractive trade and investment destination. There is also precedent to be set with the digital clauses in the U.S.-Kenya Free Trade Agreement (FTA) negotiations, which may be restarted under the Biden administration.

Prioritize Digitization as Key Pillar of U.S. Strategy in Africa. The Biden administration should signal its commitment to economic engagement in the region, engaging African governments to develop and implement comprehensive digital frameworks and policies. The United States should work with African partners to embrace high standard digital trade rules, including through the U.S.-Kenya FTA negotiations, and improve enabling environments. This might include convening high-level African ministers responsible for ICT and digital growth to discuss policy issues and paths toward alignment. It might also include a presidential statement reiterating support for digital-focused trade agreements, including the AfCFTA.

Judd Devermont is the director of the Africa Program at the Center for Strategic and International Studies (CSIS). Prior to joining CSIS, he served as the national intelligence officer for Africa from 2015 to 2018. In this position, he led the U.S. intelligence community’s analytic efforts on sub-Saharan African issues and served as the DNI’s personal representative at interagency policy meetings.

Marielle Harris is a research associate with the Africa Program at the Center for Strategic and International Studies (CSIS). Prior to joining CSIS, she lived and worked in Tanzania for two and a half years, first as a project officer on a U.S. State Department-funded program to prevent violent extremism and then as a consultant supporting program design and development for local and international organizations. Marielle has an M.A. in diplomacy and conflict studies from the Interdisciplinary Center in Herzliya, Israel, and a B.A. from Goucher College.

To read the full commentary from the Center for Strategic and International Studies (CSIS), please click here.