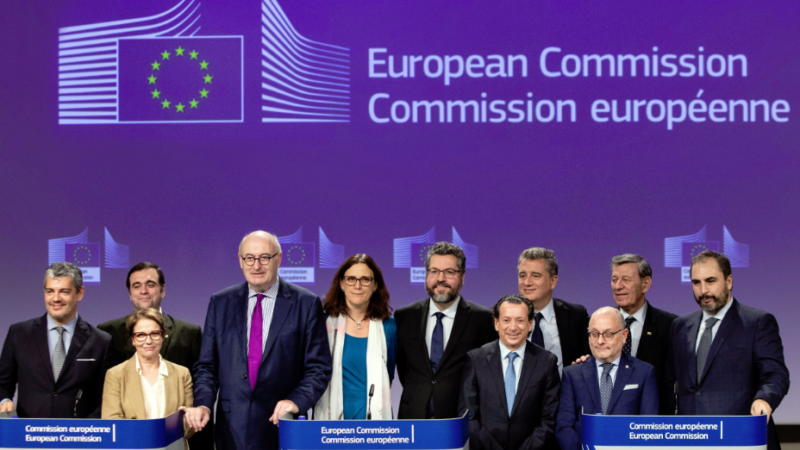 There is currently a danger that Europe will lose strategic partners in the world. And then our influence would also dwindle. Cooperation begins with the way in which we get into exchanges with each other, including in the exchange of goods. While the US continues to refuse a trade deal with the European Union and is withdrawing from multilateral institutions and treaties, the authoritarian leadership in China is gaining economic power in the world. The European Union must not be squeezed between the two powers. But in order to remain an influential power in the future, it must stand up for a rules-based order in the changing global trade environment.

Trade agreements can be an important instrument for such a rules-based order. But it is not only the market economy framework conditions such as customs regulations, investment protection or abstaining from trade barriers that should be set down in these trade agreements. There must also be binding agreements in the area of workers rights or climate protection. Such standards must not be a paper tiger. It must be possible to verify them and to enforce them. And this is exactly where the problem in the current EU-Mercosur agreement lies. The trade agreement between the EU and the member states Argentina, Brazil, Paraguay and Uruguay – from the Mercosur economic bloc – contradicts the principles of a rules-based cooperation between the two global regions.

There has been a lot of arm-wrestling over this trade agreement for two decades now. And it would be desirable for both sides of the Atlantic. If there could finally be a conclusion, then the agreement would create the biggest free trade area in the world so far. But since President Jair Bolsonaro took over in government in Brazil, the country has been sinking into the chaos of its nationalistic, racist and sexist politics. Brazil’s forests are burning, mass graves have to be dug for the victims of the coronavirus pandemic and corruption is constantly rising. Deforestation of and burning down the rainforest, exploitation of natural resources amidst bad human rights violations, harassment of trade unionists and political opposition in the country as well as questioning valid agreements and treaties on the international stage are only a few points that describe the current policy of the government.

What is a good rules-based order?

That is why it becomes all the more clear why a treaty must not only cover (customs-) free movement for goods. Without binding standards and enforceable agreements over the ‘How’ of trade, we make ourselves dependent on the arbitrariness of individual governments. By doing so, we would lose our ability to act on the basis of our common values.

It is therefore right and logical to put the EU-Mercosur agreement on ice now. Because neither in the area of trade nor in the political framework agreement do we have hard instruments, which act against deforestation and human rights violations. And the example shows clearly that we need a rules-based market more urgently than ever in a globalised, multipolar world. How else could we better prevent such moves in the wrong direction or, the other way round, support initiatives for example for the improvement of the world’s climate more rigorously? This agreement therefore offers a good opportunity to make clear what makes a good rules-based trade and how we should implement it.

A general EU framework for trade, which holds human rights, ecological and social standards as binding for all future negotiations is long overdue – and not merely as a common understanding but as enforceable rules. Only concrete complaint, verification and sanction mechanisms ensure the effectiveness of the treaty beyond daily politics. Binding compensation mechanisms should envisage damages payments or even the temporary suspension of individual trade preferences where there are violations of the treaty.

Therefore every trade agreement must, without exceptions, always, and without delay, be accompanied with a treaty of association with a self-contained chapter on sustainability. Only a comprehensive treaty of association corresponds to our demand not to uncouple dialogue, cooperation and sustainability from economic interests in a trade agreement.

Yes, that always makes the approval of all national parliaments essential. But precisely that also offers the opportunity to create more acceptance of and awareness among European citizens about the development of a sustainable economy and sustainable products in the world. A framework set down once would make repeating the same discussions in every trade agreement superfluous and give the EU’s trade policy a unity in its expectations towards third parties.

Why there cannot be an agreement now

It is precisely this transparency and binding nature that is missing in the current EU-Mercosur agreement. A binding chapter on sustainability is not foreseen. Separate from the trade component of the agreement, the effective safeguarding of workers rights is, for example, called for but without corresponding verification or sanctions mechanisms. Such a clause is not included either in the trade part of the current EU-Mercosur agreement.

How likely is it that a country such as Brazil will, under its current leadership, sign up and adhere to a political agreement that runs counter to the way it has acted up until now. What signal would we currently be sending if we finalised an agreement with such a government without ensuring that it has to adhere to it too?

An agreement with Brazil would only be a fig leaf for the inhumane policy of the Bolsonaro government. It would wreak more damage than it would make things better. Only agreements which are binding and cannot be flouted without sanctions being imposed create a fair market. Every company that is oriented towards long term success should have that as being in their own interest. Because arbitrariness, corruption and social unrest are poison for an innovative economy.

No – there cannot be an EU-Mercosur agreement under these circumstances and conditions. Not if we are interested in genuinely free and fair trade. But we should use the time and finally do our own homework – both in Germany and at the European level – so that the shaping of the world is not left to the self-interest of big US or Chinese companies.

Yasmin Fahimi is a member of parliament for the German Social Democratic Party (SPD) and chairperson of the SPD parliamentary group’s Latin America discussion group. From January 2016 to September 2017, she was State Secretary in the Federal Ministry of Labour and Social Affairs.