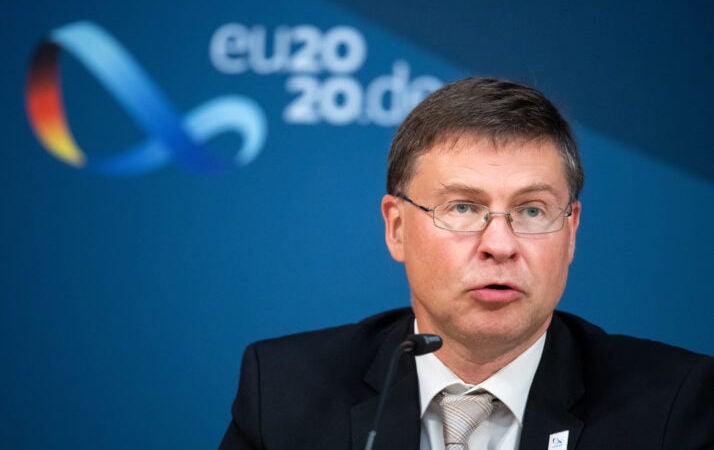 Executive Vice President Valdis Dombrovskis’s hearing as he seeks approval to become the EU’s new Trade Commissioner came at a pivotal moment for global trade. The ongoing pandemic has triggered calls for de-globalisation, politically steered reshoring and closed borders around the world.

It is vital that the EU chooses a different, more open path, one that makes the case for an assertive trade policy anchored in transparency and predictability. The EU must resist the renewed pressure for protectionism arising from the pandemic.

During the hearing, Vice President Dombrovskis mentioned the need for a renewed trade policy. If Dombrovskis gets confirmed by the European Parliament this week, he will have a difficult but not impossible task in turning the visions from the hearing into reality.

Europe needs to wake up, take a leading role and fill the current worrying void of global leadership for free and sustainable trade. In order to do this, he should focus on;

An agenda for market access. We need to get back to the basics of a positive trade agenda.

A holistic approach to trade in which conventional issues relating to customs and border obstacles are combined with issues such as facilitation of people’s mobility, reinforcement for intellectual property rights and development of efficient and secure dataflows should be the foundation.

First, the EU and its member states must approve trade deals that have been negotiated, such as the agreement with Mercosur, and secure new ones – most urgently with the United Kingdom.

But the EU, secondly, also needs to re-boost dialogue with our top trading partners on removing administrative obstacles between different regulatory systems. On a multilateral level, thirdly, the main priority should be to repair and retrench the WTO’s dispute resolution mechanisms and to modernise the regulatory framework of the WTO.

The EU should also promote global rules for products, production systems, and recycling so that a circular economy can develop free from restraints created by national requirements.

We must also be prepared to introduce defensive measures when necessary so that industry in the EU – which is reducing emissions substantially – does not lose out to considerably more carbon dioxide-heavy actors outside Europe.

Improved security and a more level playing field free from protectionism. The Covid-19 crisis has triggered a discussion about the need to increase self-sufficiency. There are heated debates on bringing production home from other countries. Supply chain management should be controlled by businesses, not by political agendas.

With the aim of levelling the playing field initiatives are being developed at EU level. These measures include limits on foreign investment in the EU, reduced opportunities to participate in public procurement, and reduced scope for state-subsidised businesses from the rest of the world to be active on the EU single market.

Each and every one of these proposals may have their merits, and they do, but their combined effect should not create a European fortress that pulls up the drawbridge to the outside world. We need a level playing field but measures to accomplish this must not hinder competition, lead to less transparency or create obstacles for investment.

Last but certainly not least, it is vital that we remember the basics: it is businesses that trade, not countries. It is also businesses that suffer when countries engage in tit-for-tat protectionism, new tariffs and trade conflicts.

The challenges that all companies are currently facing – from SME to multinationals – must provide the starting point for trade policy. These realities are all too often lost in the fog of war; this time around, trade policy needs to be aligned to the stark realities of those who actually conduct trade.

Commissioner Dombrovskis has a crucial task ahead. Without trade, the world stops. This is why the EU’s future trade policy must be ambitious, sustainable and determined. This only will ensure sustainable growth, jobs, and long-term economic prosperity.

Fredrik Persson is the chairman of the Confederation of Swedish Enterprise.

Anna Stellinger is deputy DG and head of international and EU affairs at the Confederation of Swedish Enterprise.