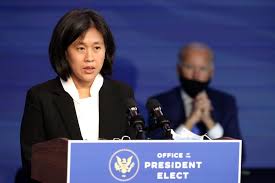 During her Senate confirmation hearing last week, incoming US Trade Representative (USTR) Katherine Tai had a notable exchange with Sen. Pat Toomey (R-PA). Toomey’s question was the very last put to her after several hours of back and forth with Democrats and Republicans on the Senate Committee on Finance. And Tai’s answer was a revealing first look into the lens through which she will view US trade in her new job — and into the changed frame of reference we can expect from the Joe Biden administration’s trade policy. See below:

Tai: My dilemma is that maybe if you had asked me this question five or ten years ago, I would have been inclined to say “yes,” but sitting here before you today in 2021, having gone through four years of Trump administration trade policies, the previous years of efforts to negotiate the TPP, and the last year of living in a pandemic world, I think that our trade policies need to be nuanced and need to take into account all of the lessons that we have learned — many of them very painful — from our most recent history. . . . I think that the most intellectually honest answer I can give to you right now is: I’m not sure, and I think it would really depend on the specific facts, the specific partner, and the kinds of consultations that we have with senators like yourself and your constituents and our stakeholders.

Sen. Toomey: I have to say, I am very disappointed with that answer. I thought within the caveats that I laid out, the answer should be pretty clear, but that does give me some concern about what your goals would be in a negotiation.

By background, training, intellect, and demonstrated political skills, Katherine Tai comes to the office with legitimately high expectations for a successful tenure. (She was previously a legal counsel at the USTR and most recently was chief Democratic counsel on the House Ways and Means Committee, where she was a key player in getting the US-Mexico-Canada Agreement across the line). Tai also received a unanimous vote from the Senate Committee on Finance for her new position — despite Toomey’s reservations.

That said, her equivocation on what Toomey considered a slam-dunk response portends a different approach and castoff mindset regarding US trade policy and negotiating future trade agreements. In her lengthy, candid testimony before the committee, Tai cast doubt on economic “efficiency,” i.e., making lowering trade barriers the chief goal of negotiations. She opined that the legacy of Adam Smith must be reevaluated, and she staunchly defended “worker-centered” trade policy as the administration’s top priority — one that could “break with both the Trump administration’s protectionism and the reflexive pro-trade stance of earlier Democratic presidents.”

Tai further stated that, in contrast to the past, the Biden administration would “recognize that people are workers and wage earners, not just consumers.” In pursuing those goals, Tai added that “tariffs remain a legitimate tool in the trade toolbox.”

The bottom line here is that Ms. Tai seems certain to handle her trade portfolio with skill and determination. But it is also true that given the Biden administration’s doctrines on trade, Pat Toomey is certain to be often “disappointed” in the USTR’s responses and actions. Parenthetically, this exchange underscores how much we free-traders will miss Senator Toomey and his Smithian view of the world when he leaves the Senate in 2022.