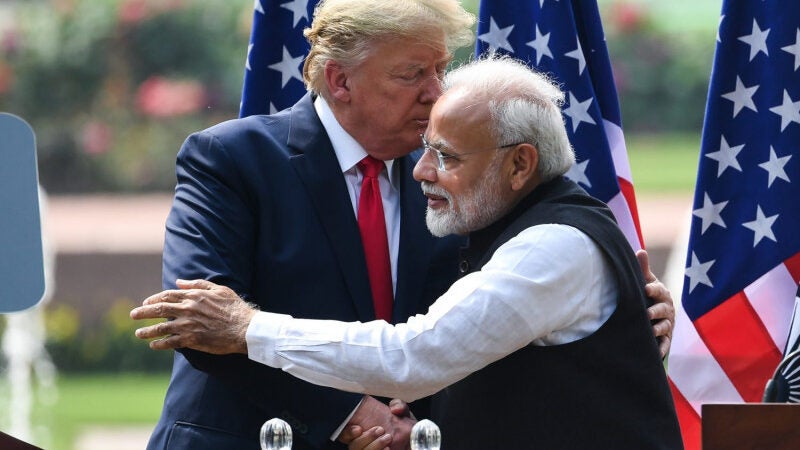 U.S. President Donald Trump and Indian Prime Minister Narendra Modi both love rallies, and so do their followers—some of whom are supporters of both leaders. Parallel rallies in Gujarat and Texas—Howdy Modi and Namaste Trump—were held on Sept. 22, 2019, and Feb. 24 and 25 this year. Each rally drew thousands of attendees in person and many more on online streams.

Pundits have frequently noted the similarities between Trump and Modi, and the closeness of their relationship. The growing ties between China and Pakistan and the recent bloody clashes between Indian and Chinese forces on the border have had many in both the United States and India clamoring for a stronger bond. But it’s the nationalistic and isolationist policies promoted by the two leaders, especially Trump, that offer the most formidable barriers to a stronger U.S.-India relationship.

Trump rose to office on promises to put “America first,” and a big part of this was related to trade. While flashy moves such as dropping out of the Trans-Pacific Partnership and renegotiating NAFTA drew most of the attention, India also faced major new obstacles in U.S. trade. The Generalized System of Preferences (GSP) is a U.S. trade preference program that dates to the early 1970s that allows developing countries to sell to the United States without tariffs on a number of different products—everything from buffalo hide to AC motors. India was a part of this program since the mid 1970s—but a review of its membership in 2018 ended with the Trump administration removing India from the GSP list.

At the time, the justification given was that India wasn’t providing sufficient market access to American products. GSP accounted for billions of dollars of U.S. exports, and the Trump administration planned to leverage the revocation in a new trade deal that is yet to be drafted and agreed upon by the United States and India. Within India, the revocation was seen as indicative of an unwillingness to compromise as well as unilateral action despite forward motion on a trade deal.

But the most damaging element may have been Trump’s immigration restrictions. The H-1B visa program allows U.S. companies to hire foreign workers for certain occupations. A majority of these visas are for the tech industry—computer science workers make up around three-quarters of those with the visa. The recipients of this visa are not from all over the world in equal numbers: Between 2007 and 2017, a disproportionate share of recipients were from India. The numbers weren’t close—more Indians received the visa than nationals of the next five countries each year combined.

U.S. presidents from both parties have traditionally been sensitive to this issue and have each played a role in expanding the program. Bill Clinton called for an increase in the cap in 2000; four years later, George W. Bush signed an expansion of the visa cap into law; and then, around a decade after that, Barack Obama further expanded the amount of people eligible for one of the visas. Trump, however, chose the opposite route. For years he has spoken of the importance of slashing immigration, and on June 22 he moved to suspend these visas until 2021—an extension of a policy first announced in April. Though both moves were ostensibly related to the coronavirus pandemic, it is hard to separate this policy from racist officials such as Trump advisor Stephen Miller and a yearslong devotion to slashing immigration—skilled and unskilled, and particularly of nonwhite migrants.

In addition, the U.S. failure to cope with the pandemic has meant that many American universities are unlikely to reopen en masse. Consequently, the Department of Homeland Security has just reiterated its assertion that any student whose campus doesn’t offer in-person classes will not be allowed to enter the United States—an effective suspension of the F-1 and J-1 visa programs. Hundreds of universities announced plans to sue the administration over the initial ban, which applied to all students, and many plan to allow some in-person classes to ensure students can avoid deportation. The lawsuits have resulted in a partial reversal of the policy—it will now only apply to incoming freshmen.

From 2004 to 2012, people of Indian origin were the second most represented group in the F-1 program. More than 150,000 Indian students put more than $5 billion into the U.S. economy from tuition and living expenses alone. Around 70 percent of them pursue science or math-related degrees, and more than 80 percent of them are headed for a master’s degree or higher. Indian people are also well represented in the J-1 program—in fiscal 2019, nearly 10 percent of all such “exchange visitor” visas issued to Asian immigrants went to Indian nationals.

Back in India, the pandemic has also forced change in policy. Modi has called for an “Atmanirbhar Bharat” or “self-reliant India.” Recent policy moves have also included attempts to slash foreign direct investment as a result of Chinese tensions. However, there is good reason to worry that it won’t stop there. India has only had a liberalized economy since the 1990s—before that, FDI was limited, and tariffs along with the License Raj, a complex web of regulations and red tape that governed most aspects of setting up and running businesses, ruled the day.

Though these were initially schemes from the socialist school started under the country’s first prime minister, Jawaharlal Nehru, support for them didn’t come just from the hard left. It took until the late 1980s and 1990s before there were serious attempts to slash regulation—a process that is still continuing today. Furthermore, the parent organization of Modi’s Bharatiya Janata Party, the Hindu nationalist Rashtriya Swayamsevak Sangh, has long been wary of increased FDI. Rashtriya Swayamsevak Sangh affiliates were sounding the alarm on FDI expansion policies since 2015, and it is unlikely a pandemic, resulting in billions of dollars in economic loss, will make them more open to it. However, this time there is more support for economic nationalism—Modi’s calls for a self-reliant India have seen agreement and support from Home Minister Amit Shah, which is something of a reversal from Shah’s (and other cabinet officials’) statements from earlier this year.

While both Trump and Modi have called for a stronger U.S.-India relationship, their desire to put their countries first at all times is taking a toll. India still needs American capital to continue to grow economically. Beyond this, as India confronts an increasingly combative China, U.S. aid and support will be important—and the United States needs India, not just as a major cultural and economic partner, but as a potential bulwark against Chinese influence in Asia.

Trump has offered some sweet—for him—words to India, but little else. At his address at “Humanity United Against Terror,” an event hosted by the Republican Hindu Coalition during Trump’s presidential campaign in 2016, he said that the “Indian and Hindu community will have a true friend in the White House, that I can guarantee.” Indian and Hindu supporters who signed on in the name of an anti-Pakistan agenda have thus been left behind as Trump pursues some of his long-standing goals such as slashing immigration levels. Trump’s loyalty is to his base and his nationalism first, and no number of rallies nor praise will change that.

Anik Joshi is a public policy professional in Washington D.C.