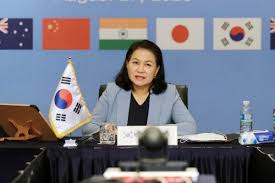 U.S. Support for Minister Yoo for WTO Director-General premised on Need for Person with Trade Expertise

When the U.S. indicated at the WTO informal meeting of the Heads of Delegation in Geneva on October 28 that it would not join the consensus for Dr. Ngozi Okonjo-Iweala becoming the next Director-General, the position was based on the U.S. view that in the current situation, the WTO needed a Director-General with trade experience. The Chair of the General Council, Amb. David Walker (NZ), had reviewed with WTO Members that Dr. Okonjo-Iweala had received the largest amount of support in the third round of consultations. Under the 2002 procedures for appointment of Directors-General adopted by the General Council and being followed in this year’s selection process, Amb. Walker and his facilitators will be putting Dr. Okonjo-Iweala’s name forward at a coming General Council meeting as the recommended choice for Director-General. The U.S. position, if maintained at the General Council meeting would prevent consensus for the Nigerian candidate.

Here is the statement released from the U.S. Trade Representative’s Office yesterday:

“Washington, DC – The Office of the United States Trade Representative issued the following statement today on the selection of the next World Trade Organization Director-General:

“The United States supports the selection of Korean Trade Minister Yoo Myung-hee as the next WTO Director-General. Minister Yoo is a bona fide trade expert who has distinguished herself during a 25-year career as a successful trade negotiator and trade policymaker. She has all the skills necessary to be an effective leader of the organization.

“This is a very difficult time for the WTO and international trade. There have been no multilateral tariff negotiations in 25 years, the dispute settlement system has gotten out of control, and too few members fulfill basic transparency obligations. The WTO is badly in need of major reform. It must be led by someone with real, hands-on experience in the field.”

Statement from the Office of the U.S. Trade Representative on the WTO Director-General Selection Process, October 28, 2020, https://ustr.gov/about-us/policy-owices/press-owice/press-releases/2020/october/statement-owice-us-trade-representative-wto-director-general-selection-process (https://ustr.gov/about-us/policy-owices/press-owice/press-releases/2020/october/statement-owice-ustrade-representative-wto-director-general-selection-process).

Decisions on whether there is or isn’t a consensus on the appointment of a particular candidate are not made at an informal head of delegation meeting. As required by the appointment procedures being followed this year, the WTO Chairman of the General Council has called a General Council meeting for November 9 at 10 a.m. at which point the Members will either appoint Dr. Okonjo-Iweala by consensus or put the appointment process in unchartered waters. The procedures provide for turning to selection by a vote by Members as a last resort.

To date, Minister Yoo has not withdrawn her candidacy, being the first candidate since the 2002 procedures were adopted by the General Council, not to withdraw after a round of consultations in which her candidacy was not announced as advancing. That situation could, of course, change in the coming days.

The Republic of Korea and the U.S. reportedly consulted by phone on Wednesday ahead of the informal heads of delegation meeting in Geneva. Yonhap News Agency, October 28, 2020, Senior diplomats of S. Korea, U.S. hold phone talks on WTO chief selection, https://en.yna.co.kr/view/AEN20201028006100325. Presumably, the United States and Korea will be discussing the current situation with other Members to see if they can get Members to build consensus around Minister Yoo. See, e.g., Yonhap News Agency, October 28, 2020, S. Korean candidate behind Nigerian rival in the global trade-chief race, https://en.yna.co.kr/view/AEN20201028004651320? section=news.

The troika of the Chairs of the General Council, Dispute Settlement Body and Trade Policy Review Body will also be consulting with Members to see if there is a path to consensus behind the candidate with the broadest support.

It promises to be a challenging time for the WTO over the coming days.