These innovations create challenges for the beleaguered multilateral trading system whose rules were crafted long before the World Wide Web existed.  As noted in this Bretton Woods Committee blogpost, evolution in how economic actors transact business requires policymakers similarly to adjust the form and content of their international trade agreements in order to remain relevant.  Policymakers are aware of the challenge. The outlines of the debate are only just now starting to emerge.

WTO Secretary General Azevedo recently noted in this speech that a significant proportion of regional trade agreements (approximately 0%) already include e-commerce components designed to extend the multilateral trading paradigm into the sector.  He expects the proportion to increase, no doubt due to the various workstreams underway inside the WTO under the “Work Programme on Electronic Commerce” launched this year among 76 nations globally. But the familiar triad of trade disciplines (market access, customs facilitation, rules/enforcement) illustrates the magnitude of the challenge at hand.

Beyond these technical areas, real questions also arise globally once the digital divide is taking into consideration.  As this think tank study indicates, developing nations increasingly question whether data should flow freely without charges or fees across borders in general even before data privacy and data protection issues are discussed.  A broad range of developed and developing countries additionally are experimenting with a range of data localization requirements such as local content, local presence and local corporate governance.  Some nations (most famously, China) also require some technology transfer as a condition of market entry.

Formally, the Trade in Services Agreement provides the main mechanism for negotiating new trade standards regarding e-commerce that go far beyond customs facilitation and authentication. The WTO talks include discussions regarding network access, online consumer protection, net neutrality, and source code in addition to localization, data privacy and customs facilitation.

The United States has negotiated ten bilateral free trade agreements since the turn of the 21st century with e-commerce chapters.  The United States Trade Representative has held two consistent positions across multiple administrations regarding cross-border digital trade.  First, such trade must occur without additional trade policy frictions in the form of customs duties.   Second, the non-discrimination principle must extend across the full scope of digital products.  These two positions appear consistently in all ten free trade agreements. 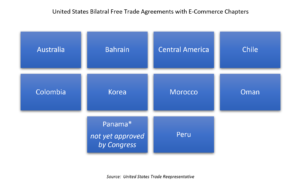 Four of these agreements (Australia, Korea, Chile, Columbia) additionally include commitments concerning digital authentication of trade documents.  Five of these agreements (Australia, Columbia, Korea, Peru) also include general language – but no enforceable obligations – regarding the importance of transparent and fair consumer protection standards. These provisions operate in addition to now-standard language in free trade agreements regarding protection of intellectual property rights.

Only one agreement (Korea) expressly addresses data localization issues.  Perhaps unsurprisingly, the agreement establishes a principle in favor of the free flow of data across borders.  It specifically pledges that both nations will “endeavor to refrain from imposing of maintaining unnecessary barriers to electronic information flows across borders.”  Should it come to litigation, surely the modifier (“unnecessary”) will be the focus of the dispute.

This is not an academic hypothetical, especially at a moment in history when the U.S. government actively seeks to exercise the full scope of trade remedies available.  The scope of active trade remedy and enforcement activity goes far beyond the headline-grabbing tariff actions in old economy sectors like steel.  In March 2019, the USTR initiated trade consultation proceedings under the US-Korea Free Trade Agreement regarding a non-tariff issue that until recently would have been considered solely the province of national government immune from trade remedies:  competition/antitrust law.

U.S. policymakers are not alone in taking proactive action to extend traditional multilateral trading standards into non-traditional areas.  Consider this 2016 European Commission document, in which the EU made clear that it also seeks to promote the free flow of data across borders, but only subject to standards (currently under negotiation within the TISA framework) that would incorporate European rules regarding data protection and data privacy.  More importantly, the EU does not reject all localization requirements; it merely seeks to ensure that “market entrants do not face unfair licensing conditions when they enter a market.”

The WTO also seeks to increase the cross-border flow of data, but from a different perspective.  Deputy Secretary General Alan Wolff indicated in a speech on April 11 that the WTO seeks to increase substantially the amount of data it collects and then shares to its membership regarding national-level regulatory standards and non-tariff barriers for the purpose of increasing transparency….and enforcement activity by members.

The data revolution is only just beginning.  Smart devices sharing data with remote servers and smart contracts that automatically execute using blockchain technology have not yet reached critical mass within the economy.  But they will.  Policymakers are only just starting the process now of sorting through what kinds of trade standards can and should apply to this sector.

Extending the traditional trade paradigm to the electronic commerce context will raise real and difficult questions about the boundary between legitimate national rule-making activities in the regulatory arena and the applicability of treaty commitments.  Put simply: can a treaty commit overrule or preempt a national rulemaking process that does not have as its stated purpose a restriction on international trade?

These issues have been under discussion for over a decade.  They were raised originally in the context of non-tariff barriers and trade in services.  So if we want a sense of how these standards could develop, the services and NTB discussions can serve as a guide.  We can expect to see individual nations test the boundaries through consultations such as the US/Korea consultations on competition law adjudication in addition to formal TISA talk.  We can also expect to see policymakers jockey for position and standard-setting authority regarding data localization and data privacy.

The relatively easy issues in the customs facilitation arena (electronic trade documents, electronic authentication standards) may generate early traction.  But the road to a new multilateral system runs through the data and e-commerce issues and their close cousins, non-tariff barriers.  The outlines for a global dialogue on these issues is only just emerging.  They may not generate headlines in the mainstream media, but these are the next generation of trade policy issues that will determine whether or not the multilateral trading system is sufficiently resilient to evolve and support a global economy centered on intangibles.

Barbara C. Matthews is Founder and CEO at BCMstrategy, Inc., a start-up with patented technology to measure cross-border public policy risk and anticipate outcomes.  She has served as a senior U.S. government official at the U.S. Treasury Department and as Senior Counsel to the House Financial Services Committee.  She is also non-resident senior fellow at the Atlantic Council and a member of WITA, the Council on Foreign Relations, and the Bretton Woods Committee. The views expressed here are her own.

All rights reserved. NextGenTrade™ material may not be reproduced or distributed, in whole or in part, without prior written permission of WITA. However, reproduction and distribution, in whole or in part, by non-profit, research or educational institutions for their own use is permitted if proper credit is given, with full citation, and copyright is acknowledged. Any other reproduction or distribution, in whatever form and by whatever media, is expressly prohibited without the prior written consent of WITA. For further information, please contact: DAnez@wita.org.