The onset of the COVID-19 pandemic meant governments faced their second systemic economic crisis in under 15 years. This year policymaking went into overdrive as states rightly took steps to protect public health and to stabilize their national economies. The impact of those steps did not stop at national borders. Once more the world trading system faced a major stress test.

• Collateral damage to trading partners is inevitable at times like this.

• Crisis policy response is temporary and so poses no long-term threat to the world trading system. • No across-the-border tariff hikes (like those witnessed in the 1930s) have occurred and so trade distortions are under control.

• It is unrealistic to expect trade reform during crises.

• Trade rules should not get in the way of national crisis response.

Having documented and analysed information relating to over 2,000 policy interventions taken during the first 10 months of 2020, in this report we marshal evidence to reject every single one of these points. We also compare the policy response this year to that in 2009, during the dark days of the Global Financial Crisis. Doing so reveals there is no single crisis playbook. Governments have a choice in how they respond to crises. Once again states made dissimilar choices with different repercussions for their trading partners. Collateral damage was not inevitable. In fact, we show the fallout across nations this year was very uneven.

This report provides the most comprehensive account to date of the cross-border commercial fallout from government measures taken to tackle the COVID-19 pandemic. Not every element of pandemic response had consequences for trading partners. Of those that did, not all were harmful. Governments may see themselves as responsible solely for the wellbeing of their own citizens but that doesn’t negate the fact that their actions can harm the health as well as the livelihoods of citizens of trading partners. This year has witnessed policy interventions that both sicken-thy-neighbour and beggarthy-neighbour. There has also been a substantial amount of import reform. Key findings relating to global policy dynamics affecting cross-border commerce include:

• By 31 October 2020, a total of 2,031 policy interventions affecting international commerce were imposed by governments around the world. That total is up 74% over the same period in 2019 and 147% higher than the average for 2015-2017, the years before the United States-China trade war really kicked in.

• 110 export curbs on medical goods and medicines remain in force. 68 such curbs have no phase-out date raising the prospect of long-term scarring.

• This year 106 nations implemented a total of 240 reforms to ease the importation of medical goods and medicines.

As is the case before any G20 Leaders’ Summit, we put the track records of this group’s members under the spotlight. Here the main findings are:

• G20 members were responsible for three-quarters of both the harmful and the beneficial knock-on effects for trading partners witnessed this year.

• The policy mix employed by G20 members varied markedly. For example, Brazil undertook 156 policy interventions this year, 47% of which harmed trading partners. For its part, the UK imposed 155 measures and 80% tilted the playing field in favour of domestic firms. Remarkably, the UK’s percentage was bested by Canada, Germany, Japan, Korea, and Saudi Arabia.

• Resort to time-bound crisis intervention varies a lot too. Russia has already phased out 20% of harmful crisis intervention taken earlier this year. China is scheduled to phase out 29% of its harmful measures by the end of this year—the comparable percentages for Italy and Mexico are 32% and 26%, respectively. Overall, 47% of Mexico’s harmful crisisera intervention is time-bound, just ahead of China (46%). In contrast, over 95% of Canada, Saudi Arabia, and South Africa’s policies imposed this year that harm trading partners are not time-bound.

• This year G20 members undertook 770 General Economic Support measures (WTO terminology that captures inside-the-border policy intervention that can affect global commerce). A total of 679 of such measures involved granting different types of trade-distorting subsidies, either to firms competing in home markets or in foreign markets. The G20 is responsible for substantial subsidy-related trade fallout, affecting competitive conditions for 9.4% of world goods trade this year. 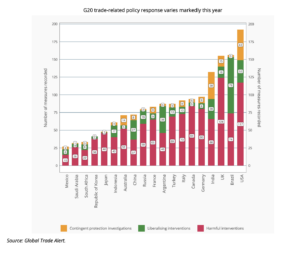 Coming at a time when the prospects for a revival of multilateral trade cooperation are improving, our evidence supports three recommendations to policymakers. First and foremost, a major shift in mindset is needed—away from the prevailing view that the world trade rule book must be effectively suspended for the duration of a crisis. This mindset has deep roots—going back to the origins of the post-war trading regime and manifests itself in what are euphemistically referred to as “flexibilities” in multilateral trade accords. In a world with extensive cross-border commercial ties, the current approach to crisis management is a recipe for the long-term scarring of the world trading system.

Keeping goods—including medical kit, medicines, and hopefully soon vaccines—flowing across borders is essential during a pandemic. More generally, open trading regimes facilitate exports, which speed up national economic recovery. A crisis management protocol should be agreed by governments to shape how they respond to crises in a way that limits harm to trading partners and keeps commerce flowing. Temporary policy intervention should be prioritised and a mechanism included to encourage the unwinding of trade distortions introduced during crises. The World Health Organization has protocols that kick in when crises occur, so why can’t the World Trade Organization?

Second, governments and international organizations need to systematically compare the state responses to this year’s pandemic and to the Global Financial Crisis so as to identify those effective policy actions that inflicted little or no harm on trading partners. Third, developing such best practices requires systematic information collection on public policy responses and their crossborder commercial fallout. The new Director-General of the World Trade Organization should strengthen that body’s monitoring and analysis functions. That monitoring needs to pay particular attention to subsidies and other General Economic Support measures. Other international organisations and independent analysts should contribute too.