President Donald Trump and presumptive Democratic presidential nominee Joe Biden differ on many issues, but government procurement is not one of them. “Buy American, Hire American” was Trump’s campaign slogan in 2016, while “Made in America” and “Buy American”  together appear 29 times in Biden’s 2020 policy document. Trump promised to crack down on federal agencies that grant excessive waivers to skirt Buy American rules, and Biden committed to closing loopholes that allow foreign content to creep into American-made goods. Both leaders harbor special affection for manufactures, particularly for iron and steel melted and poured on American soil, and for the merchant marine to carry goods between US ports. The claim of generating well-paid jobs is central to the argument for spending taxpayer dollars solely on American goods.

When presidential candidates agree, the policy must be a political winner. Nevertheless, “Buy American” or “Made in America” as a slogan for excluding imports is an economic loser. We calculate that the annual taxpayer cost for each US job arguably “saved” by Made in America probably exceeds $250,000. We put “saved” in quotation marks because buy national requirements essentially shuffle jobs from other sectors of the economy to the procurement sector. And the shuffling takes a toll on economic efficiency, which shows up in elevated price tags on everything from computers to bridges. On balance, buy national requirements create no new jobs, but they do save jobs in domestic firms that supply government needs, often at a high cost to taxpayers.

The spirit of Made in America can be traced to the Buy American Act of 1933, a Depression-era measure that buttressed the infamous Smoot-Hawley tariff. Over time, federal and state governments recognized the high cost of exclusive reliance on US firms, often sole suppliers free from competitive pressure. To reduce taxpayer gouging, safety valve features such as waivers were introduced. The World Trade Organization and the North American Free Trade Agreement also provided for limited reciprocal opening of national government procurement. Biden’s campaign document seemingly promises to eliminate safety valve features and for good measure to inspect the origin of US goods to exclude indirect foreign content. If elected, Biden, like Trump, may well allow pragmatic considerations to dilute his campaign promises. But some supporters will insist on strict adherence to Made in America. For that reason alone, it is worth calculating the taxpayer cost per job “saved.” 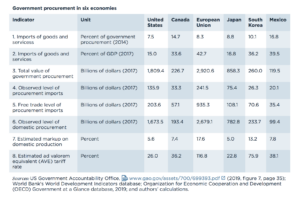 The final row in the table uses a computable partial equilibrium (CPE) model explained in the book by Hufbauer and Elliott (1994) to calculate the ad valorem equivalent (AVE) tariff rate of buy national requirements in each economy. The calculation asks what tariff rate would reduce the hypothetical “almost free trade level” of procurement imports in 2017 to the observed level of procurement imports. As an example, US hypothetical “almost free trade” procurement imports would have been $204 billion in 2017, while the observed level was just $136 billion. Put simply and roughly, domestic procurement was $68 billion higher, and imported procurement was $68 billion lower. The CPE model suggests that Buy American requirements equated to a 26 percent tariff rate, which in turn explains the import shortfall. Also, the table reports—based on the CPE model—that the cost of domestic production for procurement rose by 5.6 percent because imports were restricted. Domestic production costs rose far less than the AVE tariff rate (5.6 percent versus 26 percent) because we have assumed that imports for procurement and domestic production are far from perfect substitutes.[1]

While the implied US AVE tariff rate of 26 percent is high, the AVE tariff rates for most of the other countries are higher still. In other words, foreign buy national requirements are generally more severe, if not so well advertised as Buy American. High AVE tariff rates abroad reflect the low proportion of imports for procurement, relative to overall imports.

The Trump administration would see foreign procurement barriers as ample justification for Buy American. Before jumping on this bandwagon, a Biden administration should consider the taxpayer cost per job “saved” by an even stricter Made in America regime.

This is a lowball estimate because of optimistic demand and supply parameters built into the CPE model. However, a markup of 5.6 percent on $1,674 billion of the observed level of US domestic procurement in 2017 translates into a taxpayer cost of $94 billion. Arithmetic leads to the startling conclusion that the annual taxpayer cost was over $250,000 for each job “saved” in the domestic procurement industry ($94 billion divided by 358,360). While this figure is high, other studies have shown that the consumer cost per job “saved” in the steel industry exceeds $900,000. Such analysis demonstrates that protection in whatever form—outright tariffs, nontariff barriers, Buy American—extracts a considerable price from taxpayers or consumers for each job preserved in the sheltered activity. Of course, very little of the money finds its way to workers. Instead, the extra cost is largely lost to inefficient production and higher profits collected by firms.

Given the popular resurgence of mercantilism, it would be too much to ask a Biden administration to embrace free trade in government procurement. But it might not be too much to consider a “Made in North America” agenda for central government procurement, covering the United States, Canada, and Mexico. Judging from the estimates in the table, Canada and Mexico embrace buy national policies to a greater extent than the United States. A trial pact lasting six years might be negotiated for liberalization within North America, ambitiously covering almost all federal procurement. Actual cross-border procurement should then be closely monitored, and at the end of six years the pact could be extended if the three parties were satisfied. And, if this extent of free trade works within North America, broader liberalization might eventually be pursued with allies in Europe, Japan, and South Korea.

2. Certain types of government procurement may be too sensitive (military and computer services) to permit imports or logistically too difficult (hospitals, some construction). However, our assumptions on parameter values, and the potential extent of free trade, are skewed toward a low AVE tariff rate estimate.

Both authors are senior research staff at PIIE.