The Chairman of the General Council, Amb. David Walker (New Zealand), emailed the heads of delegations today that there would be an informal meeting of the Heads of Delegation on Friday 18 September 2020 at 11 a.m. (Geneva) at which Amb. Walker with his two facilitators (Amb. Castillo of Honduras, Chairman of the Dispute Settlement Body; Amb. Aspelund of Iceland, Chairman of the Trade Policy Review Body) would “report to the membership on the outcome of the first round of consultations, as required under the Procedures.” Since 7 September until today, the three Chairs have held confessionals with delegations to learn which four of the eight candidates for the position of Director-General of the WTO each Member supports. After compiling the information received, Amb. Walker and his facilitators will determine which five candidates have the best chance at achieving consensus. The three candidates not included in that list will be asked to withdraw. The five candidates who go on to Round 2 of the consultations will be identified at the informal meeting this Friday.

Amb. Walker will also announce when the second round of consultations will commence. During the second round, Members will be asked to present the names of two candidates whom the individual Member supports. When the consultations are concluded, the Chairman of the General Council and his facilitators will again review the results and inform the Membership of which two candidates have been viewed as most likely to achieve consensus and hence will move on to the third round of consultations. The other three candidates will be asked to withdraw.

The third round of consultations will then be conducted to find the candidate that, based on Members information to Amb. Walker and his facilitators, is viewed as most likely to achieve consensus.

If Members agree that the candidate has the support of the Membership, the Chairman of the General Council will call a General Council meeting at which the selection can be confirmed by consensus.

It is anticipated that all three rounds of consultations will be concluded by November 7.

Today’s email from Amb. Walker is embedded below. 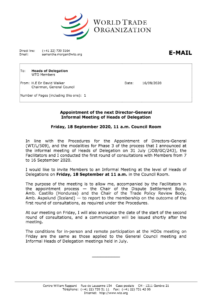