Blogs > Time For An Upgrade: Moving WTO Negotiations Into The Digital World 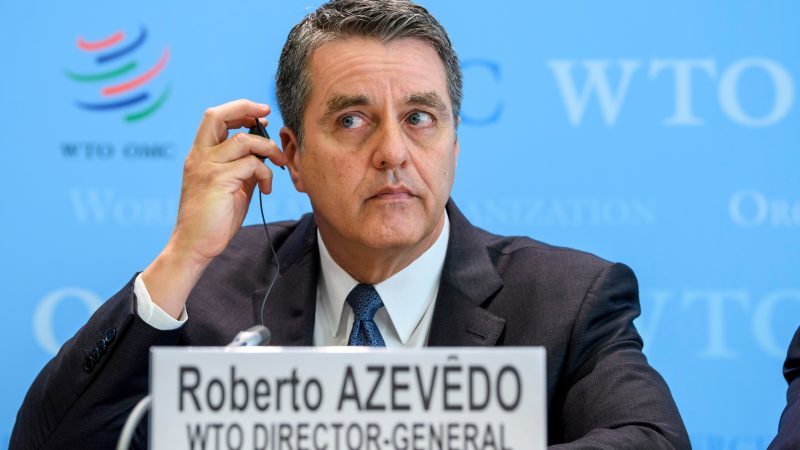 Time For An Upgrade: Moving WTO Negotiations Into The Digital World

The year 2020 was already going to be a challenging one for the World Trade Organization (WTO), with a paralyzed dispute settlement system and a negotiating agenda fraught with landmines. The early departure of Roberto Azevedo, the erstwhile director-general, has focused attention on selecting his successor. Moreover, COVID-19 has added to these burdens not only with proliferating trade restrictions, but also requiring the WTO to transform the way it has conducted its work over the past 25 years. In contrast, the Organization for Economic Cooperation and Development (OECD) is not only proving, but also improving its relevance in going digital. The WTO could do the same if it got its act together. Unfortunately, it is seriously struggling. As is becoming increasingly apparent, the need to go digital is not a temporary phenomenon — it is the new normal and will outlive COVID. Decisions the WTO and its members make now on how to operate in this new world will help define its role for the coming years.

To date, WTO has relied heavily on in-person meetings. Given that most of its work is reflected in binding commitments by governments, conducting these important discussions remotely has not seemed to be a viable option. With the combination of representatives stationed in Geneva, international travel by capital-based officials and bi-annual ministerial sessions, this formula historically worked well.

As a result, many WTO officials, diplomats, and trade negotiators may not be familiar, nor comfortable, with digital negotiations. This is understandable because for many their experiences may have been limited to old technologies allowing for one-way webcasting. But new technologies have rapidly improved the ability for interactive exchanges with large numbers of individuals. Making the leap to digital will take considerable adjustment and an openness to new technologies, as well as a strong commitment to do so. Some countries and international organizations are showing the way.

Through the years, the U.S. government has utilized digital tools to advance trade negotiations. For example, these applications have proved useful in allowing negotiators to walk through new proposals, getting regulators to the table whom often don’t have the funds nor time to travel, conducting legal scrubs of negotiated text, and even narrowing differences on certain topics. Where they have often fallen short, however, is in the final stages of negotiations, when tough political issues need to be settled.

Many international organizations have no choice but to go digital in the COVID world given their global membership and travel restrictions, yet adapting can be especially difficult due to their diverse membership coupled with the lack the expertise, funding, and leadership needed to make the transformation. Some United Nation agencies, such as the International Telecommunications Union, the International Monetary Fund, and the World Bank have made a quick transition, in part as they have a longer history of remote participation.

The OECD has shown the way in adapting to the digital world. With a limited membership of developed countries, going digital has been easier. Members are supportive of its move online, in part, as most of its work is characterized by discussions, reports, and recommendations, with few binding outcomes. However, even in the one key area where it is the venue for negotiations, it has gone digital. The digital tax negotiations, facing an end of the year deadline have moved online with a steady schedule of virtual meetings. An international solution is needed more than ever as COVID-19 has made digital commerce more important than ever, while the financial impact has led some countries to unilaterally push ahead and enact digital taxes.

Unfortunately, the WTO lags well behind. For example, while the IMF, the World Bank, and the G20 have held their recent senior-level meetings virtually, the WTO quickly chose to postpone its ministerial meeting scheduled for June in Kazakhstan. To be fair, the WTO is holding some meetings online. For example, it conducted Australia’s periodic Trade Policy Review remotely, and earlier this month the General Council met virtually to discuss COVID-related trade restrictions. At the WTO’s membership-wide virtual meeting in April there was broad support for digital adaptation, but it didn’t outline next steps. Nor was it unanimous, with some members opposing the move to digital, either feeling technically disadvantaged, reluctant to move off traditional practices, or perhaps for political reasons.

This lack of action and support has the potential to further weaken the WTO, at a time when it can least afford it. Long-running negotiations over fisheries subsidies — which had been aiming for a final deal by the June ministerial — have been suspended, with valuable momentum coming to a screeching halt. The main sign of progress has been in joint statement initiative negotiations on e-commerce, where members have held or are planning webinars, non-negotiating plenary sessions (the next is scheduled for June 7), and small group meetings on specific text proposals. While important, thus far these ad-hoc arrangements do not appear to represent a fundamental shift. However, Canada’s Ambassador to the WTO Stephen de Boer foreshadowed that these negotiations may hold broader significance as an experiment or learning experience in how the WTO could adapt to digital talks.

Recognize the Limits, But Use Digital Talks as Much as Possible

Negotiating trade agreements, from start to finish, digitally — whether bilateral, plurilateral, or multilateral — is not ideal. While many negotiations, particularly bilateral, have often included a digital aspect, the in-person component has been the most prevalent. The earlier stages of a trade negotiation lend themselves better to remote communication. This is when proposals are typically shared, explained in detail, and longer interventions by each side are more the norm. This stage is more about setting the stage and narrowing differences, rather than making consequential concessions.

However, as negotiations proceed and become more difficult as politically charged issues come to the forefront, the limits of digital negotiations become apparent. It’s difficult to explore potential tradeoffs, hold frank discussions on bottom lines, and hold side conversations and side group meetings to help break deadlocks. Moreover, interactive back-and-forth conversations are critical, which are more challenging on digital technologies. Finally, the human element of negotiations cannot be discounted, particularly the importance of being able to read the body language of one’s counterpart and the wider delegation. These challenges can become more acute in a multilateral setting, like the WTO. For example, critical negotiating log jams are typically broken outside of the formal sessions and then presented to the larger group for consideration. Side meetings are also critical in building coalitions, a critical tool in large group negotiations.

It’s understandable that some WTO members are reluctant to embrace digital tools. However, the alternative of putting negotiations on hold, like the fisheries subsidies talks, until things get back to “normal,” is not a winning strategy. It risks sidelining the WTO even more. The better path is for the WTO and its members to recognize the limits and adapt to using digital tools as much as possible.

As to the use of technology for negotiations, officials raise a few common concerns and issues — choosing a platform, confidentiality and cybersecurity concerns, connectivity matters, and interpretation challenges.

Choosing a platform: A decade ago, it would have been much harder, but these days officials are spoiled for choice in that leading video conferencing platforms — whether Zoom, Microsoft Teams, BlueJeans, or others — offer amazing reliability, accessibility, and simplicity in helping facilitate discussions. In addition, there are shared document platforms that let individuals in dispersed locations view, edit, and comment on shared documents. These platforms provide generally similar services and can handle many participants from around the world, require little or no training, and are free or relatively inexpensive. Of course, in selecting a platform, officials need to be mindful of certain limitations on choice that individual countries have imposed for various reasons.

Confidentiality concerns: Online talks raise lingering concerns about confidentiality, with a fear that there will be a lasting record of discussions. Yet this concern is no different from someone using a cell phone to record an in-person meeting. It comes down to a matter of technology and trust. If the UK parliament and U.S. House of Representatives can move to virtual debates and remote voting — which the latter has, while the former is moving to do the same — trade officials can too.

A combination of technology, including digital identity systems, and good cybersecurity and meeting practices address many security concerns. Many platforms provide end-to-end encryption for data moving between participants. Administrative controls allow hosts to manage user accounts, meetings, and security, such as activating multi-factor authentication. For all the hysteria, stopping “zoom bombing” simply requires the host to set a password, create a waiting room for screening, and limit screen sharing.

Connectivity and interpretation concerns: Poor Internet connectivity is a legitimate challenge as it not only complicates participation, but it makes remote interpretation difficult as it affects both verbal and non-verbal communication. Distorted sound prevents full and proper interpretation, while distorted video makes it hard to observe non-verbal signals. Disrupted or unclear interpretation creates confusion, with speakers tending to repeat what they’ve said, while other participants tune out. Furthermore, officials need to account for the fact that research shows that interpreters’ remote performance declines faster than their on-site performance. But virtually every national capital in the world has good enough broadband capability for video conference capabilities. The WTO could step in and help setup mitigating measures for officials from countries that lack this basic connectivity.

Recommendations for Moving to a Digital Negotiating World

Considering the necessities and challenges presented above, here are five suggestions for how the WTO can move online successfully:

The WTO is far from alone in struggling to shift to digital operations during COVID-19. However, its members have the most to lose by not embracing the digital world for WTO work, whether this is for political, luddite, or technical reasons. Putting negotiations on hold while its rules are in desperate need of update and expansion will accelerate the WTO’s drift towards irrelevancy. Conversely, rising to the challenge and welcoming the digital world could help turn its fortunes around.