Blogs > RCEP Might Not Stop Reshuffling of Asian Value Chains 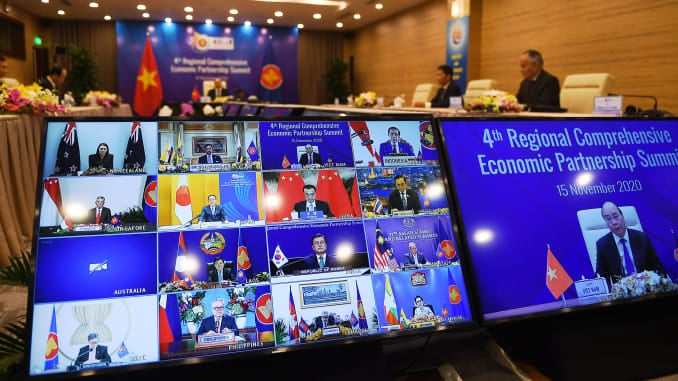 RCEP Might Not Stop Reshuffling of Asian Value Chains

There could not be better timing for China to announce such a huge trade deal as the Regional Comprehensive Economic Partnership (RCEP), in the midst of presidential reshuffling in the US.

Furthermore, among the many wild cards that Beijing could use during the period of political vacuum in the US, opting for trade liberalisation is a great plus for China’s image and probably more relevant in economic terms than any other more aggressive option that the media have been discussing, from Taiwan to the South China Sea.

Still, it is important to note that the RCEP negotiations had been dragging on for eight years and that the final agreement has been watered down in terms of key liberalisation measures.

Not only was the geographical coverage bigger when the negotiations started – it included India – but the scope in terms of liberalisation was also larger. Furthermore, when RCEP started as a response to the Trans-Pacific Partnership (TPP), the US-China strategic competition was just starting, while it is now pulling RCEP members in different directions.

The best example is recent trade friction between China and Australia, but there could be many others. In the same vein, increasingly pervasive US sanctions against targets in China will not help make RCEP a success.

While the US – and Europe – are key losers remaining outside of this deal, the biggest winner might not necessarily be China. China is no doubt bound to benefit, but other members within RCEP may benefit even more.

China will face fewer barriers to exports into the rest of Asia (including e-commerce). But the Association of Southeast Asian Nations, on the one hand, and South Korea and Japan on the other will find it easier to build their value chains, where production is based in ASEAN with Northeast Asian investment.

In fact, ASEAN countries have been receiving an increasing amount of manufacturing FDI (foreign direct investment) from Japan, South Korea and Taiwan, which is already bigger than their FDI into China. Such a sharp increase in investment into ASEAN is not only a response to higher labour costs in China but is also meant to diversify away from an excessively China-centric value chain.

Thanks to this, Japanese, South Korean and Taiwanese trade integration within ASEAN has also been increasing, especially when focusing on intermediate goods. Against this backdrop, ASEAN will likely grow its own manufacturing capacity, thanks to Northeast Asia’s FDI. However, a good chunk of the final demand might still be in China.

In sum, while the actual increase in market access will remain limited among some of the RCEP members (such as Australia and China), the importance of this deal is for the world to realise that Asia is still dependent on the Chinese market and that Asian countries cannot pass on the opportunity of improved (even if still limited) market access into China.

As for the relative losers outside of the deal such as the US, we would imagine that the incoming Joe Biden administration will soon react by engaging in negotiations for a trade deal with Asia.

Alicia García-Herrero is a Senior Fellow at European think-tank BRUEGEL. She is also the Chief Economist for Asia Pacific at Natixis and non-resident Research Fellow at Madrid-based political think tank Real Instituto Elcano.