With relations between Washington and Beijing in freefall, the future of global supply chains is uncertain. Even as inconsistent White House messages continue to raise questions about the direction of U.S. trade policy, trade war tariffs remain in effect. Meanwhile, the fallout from Beijing’s proposed national security law, which threatens to constrain Hong Kong’s autonomy, further imperils the already fragile phase one trade agreement between the two superpowers. This friction, paired with the race to secure medical supplies and develop a coronavirus vaccine, is provoking a reevaluation of just-in-time supply chains that privilege efficiency above all else.

A chorus of ‘re’-themed supply chain buzzwords—resiliency, redundancy, reshoring, restructuring, and regionalization, to name a few—is music to the ears of White House protectionists, who launched the trade war and who think China’s global manufacturing role is long overdue for revision. U.S. President Donald Trump’s strategy of reducing the United States’ trade deficits and rejuvenating the U.S. economy stems from a nationalist view of supply chains. In this vein, Trump’s trade adviser Peter Navarro signaled the country’s $2 trillion in spending on stimulus packages in part aims to bring more manufacturing jobs back to American shores.

Though the coronavirus’s impact on supply networks could change the game, recently released trade data show the trade war’s early impact on the world’s two largest economies and the future of global commerce. Paradoxically, the results are largely the opposite of what the White House has been counting on. Tariffs have produced no real improvement in the United States’ underlying trade balance, while China’s trade surplus has increased and its export markets have become more diversified.

Trump’s reduction of the bilateral trade deficit with China was quite costly, with a significant contraction in economic activity and an inadvertent increase in China’s overall trade surplus. And, if not for a reduction in oil imports, the United States’ trade deficit actually would have widened—calling into question the logic of a protectionist strategy designed to improve the country’s trade balance. 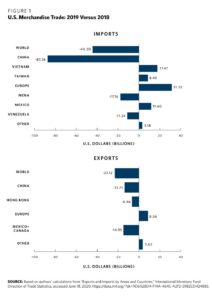 Yet imports from China only fell by 16 percent in 2019 compared to the previous year—a testament to the difficulty of shifting trade relationships in the short run. In fact, the reported data likely overstate the true decline. One major reason is transshipment, when traded goods have a layover in a third country en route from where they were manufactured to their final destination. This practice is sometimes used to sidestep tariffs. Such a tactic can cause U.S. customs officials to classify goods as coming from intermediary trade partners, such as Vietnam or Mexico, when in reality they are still coming from China.

WHO BENEFITS FROM THE U.S TARIFFS?

Regardless, a drop in imports from China only actually reduces U.S. reliance on China if companies manage to find viable substitutes. But last year, the United States was not able to fully meet the need for alternatives to Chinese merchandise. Strong overall GDP growth in 2019 suggests that total imports would likely have increased without tariffs.

In the short term, other countries that already make products affected by U.S. tariffs on China are most likely to benefit. Instead of buying from China, U.S. companies are looking to buy similar products from countries that are not impacted by the tariffs. In Asia, the undisputed winner is Vietnam, whose exports to the United States rose by 35 percent, or $17.5 billion. Another standout, Taiwan, used its long-standing comparative advantage in hardware components to benefit from trade diversion.

Europe and Mexico filled in much of the gap, as U.S. imports from these economies rose by $31.2 billion and $11.6 billion, respectively (see figure 1). Also noteworthy, imports from Venezuela and the Middle East plummeted as a result of U.S. sanctions and increased energy self-sufficiency.

On the exports side, the United States was hurt by depressed demand due to retaliatory tariffs imposed by China and others in response to U.S. duties on steel and aluminum. Rather than increasing the competitiveness of U.S. producers, tariffs instead led to a net decline of $23.1 billion in exports.

Moreover, despite Trump’s vision of a “blue collar boom,” U.S. domestic manufacturing did not pick up the slack. Instead, the industrial production index experienced a year-on-year decline for the first time since 2015 in response to supply chain interruptions and tariff-induced increases in production costs. This yielded an overall welfare loss in the form of forgone consumption due to higher prices for retailers and households, contradicting the president’s persistent claim that China pays for the tariffs.

CHINA COMES OUT AHEAD

How did China respond? Unsurprisingly, exports to the United States and Hong Kong—an intermediary hub—declined significantly as a result of tariffs (see figure 2). However, China was able to compensate by ramping up sales to nearly everyone else, so much so that exports contracted by the relatively small amount of just $2.8 billion on net.

Chinese exports to Southeast Asia alone rose by $38.5 billion, largely due to the Association of Southeast Asian Nations (ASEAN), which overtook the United States as China’s second-largest trading partner. Exports also increased to Europe and sub-Saharan Africa, regions where China has sought to deepen economic ties under its Belt and Road Initiative. 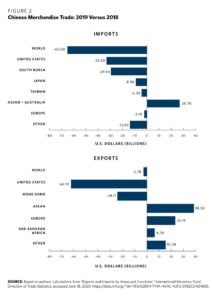 Chinese imports from the United States fell by $33 billion in 2019 due to retaliatory tariffs. And because of the sharp decline in exports of processed manufactured goods to the United States, China further cut back on imported components from Japan, South Korea, and Taiwan. This led to a huge decline in China’s total imports—resulting in an improvement in the country’s overall trade balance of over $60 billion last year despite the trade war. These ripple effects underscore the fact that, contrary to the misguided view of the White House, trade is a multilateral phenomenon, not a bilateral one.

In 2019, the United States’ share of Chinese imports and exports fell to a twenty-seven-year low. Many observers agree that U.S.-China trade tensions have made some degree of decoupling all but inevitable. The pandemic only adds to that likelihood. The eroding phase one trade agreement, even if miraculously fulfilled, would do little to reverse that. But while governments can prod along decoupling, the outcomes will ultimately come down to the commercial decisions that companies make. The impact of these decisions on global supply chains will take years to fully materialize, in potentially unexpected ways.

In the short run, manufacturers will continue to divert trade and search for temporary tariff-dodging workarounds such as transshipment and adjusting suppliers. In the medium run, manufacturers will scale production and reallocate personnel at preexisting facilities. Only in the long run can significant decoupling take place, given the large upfront costs and requisite advance planning.

Uncertainty in the policy environment due to the increasingly unstable U.S.-China relationship complicates major investment decisions, and the pandemic only compounds this risk. But the principle underpinning supply chains based on comparative advantage—a country’s ability to produce certain goods and services more efficiently and cheaply than its competitors—remains powerful. This encourages high-skill products to be produced in developed economies, and more labor-intensive assembly activities to take place in countries with lower wages. Protective tariffs work against this free-market principle by shifting incentives toward political rather than commercial objectives.

In truth, China’s dominance in global manufacturing has been gradually waning since its peak in 2015, due to structural shifts in the Chinese economy, such as its continued graduation from low-skill manufacturing such as clothing and textiles, the decline of China’s role as a location for final assembly, and rebalancing toward consumption and services, which are less trade-intensive than capital investment. The trade war and pandemic-induced supply chain shifts only further accelerate these trends.

Ironically, offshoring has come full circle. Chinese firms are already moving to lower-cost venues that better serve the U.S. market—as exemplified by Chinese electronics manufacturer Hisense’s choice to double investment in its electronics plant in Mexico. The White House’s protectionist policies, which threaten to escalate ahead of the November 2020 elections, may be shaking up supply chains. But Trump’s goal of reducing trade deficits and weakening China’s economic prospects is yet unrealized.