Blogs > Trying to catch up with Biden, trade is at the forefront of Trump’s campaign

Trying to catch up with Biden, trade is at the forefront of Trump’s campaign

After months of relative calm in trade relations with the EU, Trump ratcheted it up last Friday. During an event with US fishermen in Maine, the President threatened to raise US import tariffs on EU cars in relation to relatively high import tariffs that the EU charges for imports of American lobsters.

One could reason that the President will not follow up on his threat because it would deprive him of an ally in his war with China on the origin of the coronavirus, the status of Hong Kong and of course on the trade deficit and protection of Western technologies. The EU has stated on various occasions that it will retaliate if Trump raises tariffs on EU cars, which could lead to a tit-for-tat trade battle. That would not be well received by American businesses.

But Trump’s trade policy over the last two years has shown that the President does not fear the economic consequences of multiple trade wars nor the effect of such actions on US international relations.

Limited exposure of European autos to US demand 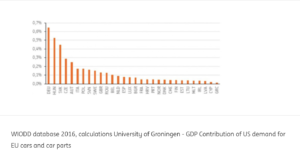 A hike of the US import tariff on EU cars to 22.5% as Trump has threatened to do on various occasions, would come at a very bad time for the EU. Even before the Covid-19 crisis crushed auto sales, the European automotive sector was facing tough times. ING calculations show that if the US were to increase tariffs by 20 percentage points, the direct negative effect on the EU-economy would be 0.1% of EU GDP. This effect is small because the value added of exports of cars and car parts to the US makes up only a small part of EU GDP (0.27%). Germany is most vulnerable to negative demand shocks from the US, followed by Hungary and Slovakia (see chart).

Instead of reacting sharply to Trump’s latest threat and bring the conflict to a head, the EU will probably try to sit the quarrel out until the US Presidential election, hoping that it can build better trade relations under a new US President.

But as long as Trump is lagging in the polls, he needs to take action. Emboldened by the surprisingly strong performance of stock markets recently and the astonishing positive employment data last Friday, Trump seems to try to improve his chances of re-election by reinforcing the message that he is tough on trade and dedicated to protecting American jobs.