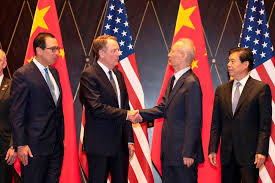 WASHINGTON — For decades, Robert E. Lighthizer, the United States trade representative, was reliably one of Washington’s toughest critics when it came to China and its trade practices.

But since brokering a trade deal with Beijing in January, he has become one of China’s biggest defenders within the administration, emerging as an obstacle to lawmakers and other top White House officials who want to punish China over its treatment of ethnic Muslims and begin trade talks with Taiwan.

Over the past several months, Mr. Lighthizer has pushed back on several proposed policy measures that rankled Beijing, arguing those efforts could disrupt the U.S.-China trade pact that he and President Trump spent more than two years trying to forge, according to several former government officials and other people familiar with the conversations.

Mr. Lighthizer has also curtailed his public criticisms of China, instead touting Beijing’s efforts to uphold the trade pact and live up to its end of the deal.

Those views have brought Mr. Lighthizer into conflict with more hawkish members of the Trump administration, including State Department officials who have advocated closer ties with Taiwan, along with members of Congress.

On Thursday, 50 U.S. senators of both parties sent Mr. Lighthizer a letter urging him to begin the formal process of negotiating a trade pact with Taiwan, a self-governing island that Beijing claims as part of its territory. Such a move would likely anger Beijing, which sees certain partnerships with Taiwan as an affront to China’s sovereignty.

“We are confident that a U.S.-Taiwan trade agreement would promote security and economic growth for the United States, Taiwan and the Indo-Pacific as a whole,” they wrote. “We urge the administration to prioritize a comprehensive trade agreement with Taiwan, and we look forward to working with you to secure this framework.”

Proponents say dealing directly with Taiwan could help counter some of China’s growing influence in technology and commerce, while also helping to strengthen a democratic ally. But Bonnie Glaser, a senior adviser for Asia at the Center for Strategic and International Studies, said concerns over preserving the trade deal with China were likely to sink the prospects of trade negotiations, at least for the remainder of this administration.

“The administration, particularly of course U.S.T.R., they’re focused like a laser on this trade deal with China,” she said. “The president doesn’t want it to fall apart.”

Mr. Lighthizer’s warmer stance toward Beijing comes amid growing tensions between the United States and China. Mr. Trump has said he is “not happy” with China for allowing coronavirus to spread beyond its borders and has ratcheted up punishment on Chinese tech companies, like TikTok and WeChat, saying they pose a threat to national security.

Yet Mr. Trump has not ripped up the trade deal or threatened to take additional trade action against Beijing. In part, that’s because the president faces pressure — from American banks, businesses and farmers — not to let commercial ties with China deteriorate further, especially right before the election.

American farmers eagerly greeted the signing of the trade deal in January as an end to months of uncertainty in their markets. The deal locked in new access to the Chinese market for American banks and agriculturalists, as well as the promise of record purchases of soybeans, hogs and natural gas.

But those targets have been widely seen as unrealistic, and so far, China is on track to purchase just some of the goods it has promised.

Despite the slow pace of purchases, Mr. Lighthizer has defended the deal, telling a House committee in June that China was giving “every indication” it would uphold the agreement, in spite of coronavirus. Instead, he reserved his harshest criticism for the World Trade Organization, which he called “a mess” in need of “radical reform,” and the European Union, which he threatened with tariffs if it did not agree to a trade deal on America’s terms.

Mr. Lighthizer’s shift in tone is notable, given that he built a reputation as a China critic during a long career in Congress, the executive branch and as a Washington trade lawyer. His history of battling China, including pursuing trade cases against the country and opposing its entry into the World Trade Organization, was what first ingratiated him to Mr. Trump, who held a similarly dim view of China’s trade practices.

But Mr. Lighthizer has recently intervened to shoot down several policy measures that could have threatened China economically, including efforts by U.S. Customs and Border Protection to impose a sweeping ban on cotton and tomatoes from Xinjiang.

The measure, which was scheduled to be announced the morning of Sept. 8, would have barred many products from Xinjiang over concerns that they were made with forced labor by Uighurs and other Muslim minorities that China has detained in camps in the region. But Mr. Lighthizer joined Steven Mnuchin, the Treasury Secretary, Sonny Perdue, the Secretary of Agriculture, and Mark Meadows, the White House chief of staff, in objecting to the measure on the grounds that it could provoke China, threatening American cotton exports and the trade deal, people familiar with the matter said. China is one of the world’s largest cotton importers, purchasing nearly $1 billion dollars’ worth of American cotton in 2018.

Earlier this summer, as the Trump administration brainstormed ways to retaliate against China for its crackdown on Hong Kong, Mr. Lighthizer also opposed the idea of placing tariffs — similar to those imposed on China — on Hong Kong.

Some analysts have said that neither measure appeared particularly well thought out. Clete Willems, a former Trump administration trade official who is now a partner at Akin Gump, defended Mr. Lighthizer’s positions, saying the administration “should take strong action on Hong Kong and Xinjiang, but only if those actions have a chance of changing behavior and don’t have unintended consequences.”

But Mr. Lighthizer’s reluctance to begin trade talks with Taiwan, a self-governing island that Beijing claims as part of its territory, has been more controversial. In particular, it has placed him in opposition with officials from the departments of State, Defense and Commerce and the National Security Council who support closer relations with the island to counter China’s influence.

Things came to a head after David R. Stilwell, the assistant secretary of state for the Bureau of East Asian and Pacific Affairs at the State Department, gave a speech at a Washington think tank in late August proposing new economic engagement with Taiwan. The State Department also began planning to dispatch its most senior economic official, Keith Krach, to Taiwan in mid-September.

Those proposals prompted a disagreement between Mike Pompeo, the secretary of state, and Mr. Lighthizer, who viewed trade talks with Taiwan as being firmly in U.S.T.R.’s domain, three people familiar with the matter said. Another person said that U.S.T.R. and the State Department had clashed over Mr. Krach’s trip.

In an emailed response, Mr. Lighthizer called the anecdote “a crazy made up story.”

“I’ve never spoken with Secretary Pompeo about any of this. And I’ve never had an angry clash with the Secretary about this or anything else in my entire life,” Mr. Lighthizer said.

China considers its claim to Taiwan nonnegotiable, and it has lashed out at companies and politicians that do not support that view, including trying to muscle Taiwan out of multilateral trade deals to economically isolate the island. But Taiwan’s current president, Tsai Ing-wen, has sought to increase the island’s independence by cultivating closer ties with the United States.

In late August, Ms. Tsai eased previous restrictions on imports of U.S. beef and pork, a move aimed at enticing the United States into trade talks. Mr. Pompeo welcomed the move in a tweet, saying that it “opens the door for even deeper economic and trade cooperation..” U.S.T.R. did not issue any statement.

Taiwan is home to fewer than 24 million people, but it was the 10th largest U.S. trading partner in 2019, providing a large market for American agricultural products and arms sales.

American officials have also come to see Taiwan, a major electronics supplier, as a bulwark against China’s domination of certain advanced technologies. In May, the Trump administration announced that Taiwan Semiconductor Manufacturing Company, a leading computer chip maker, had pledged to build a factory in Arizona, though that project is still awaiting Congressional funding.

Not everyone thinks trade talks with Taiwan would be a certain success. James Green, a senior adviser at McLarty Associates and a former trade official, said the United States spent two decades negotiating with Taiwan over a trade and investment agreement with little result. He said that Mr. Lighthizer might be reluctant to begin such a long and difficult process right before an election, when the administration’s future is uncertain.

Mr. Trump has also appeared circumspect of closer ties with Taiwan. The president, who provoked China’s ire shortly after his 2016 election by accepting a congratulatory call from Ms. Tsai, has long made clear to advisers the importance he places on the China trade deal. Mr. Trump repeatedly emphasized Taiwan’s lack of importance by comparing the island to the tip of a Sharpie and China to the resolute desk in the Oval Office, John Bolton, Mr. Trump’s former national security adviser, wrote in his book.

But elsewhere in Washington, support for closer ties with Taiwan is growing.

U.S. Secretary of Health and Human Services Alex Azar traveled to Taiwan in August, the highest ranking U.S. official to visit in decades. On Aug. 31, Mr. Stilwell announced a new economic dialogue that would “explore the full spectrum of our economic relationship — semiconductors, health care, energy and beyond — with technology at the core.”

The hope was that the effort would build momentum and pressure on U.S.T.R. to advance trade ties, said Ms. Glaser of the Center for Strategic and International Studies.

The State Department “did what they could in their realm of responsibility,” she said. “But at the end of the day, State cannot negotiate trade agreements, and that’s what Taiwan wants.”

In September, Mr. Krach visited the island to discuss technology investments and other economic ties with Taiwanese officials, and dine with Ms. Tsai and T.S.M.C’s retired founder, Morris Chang, people familiar with the trip say. But Mr. Krach did not touch on the issue of trade talks.

Ana Swanson is based in the Washington bureau and covers trade and international economics for The New York Times. She previously worked at The Washington Post, where she wrote about trade, the Federal Reserve and the economy.